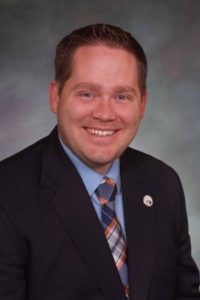 We’ve been meaning to write something about control of the State Senate in Colorado now that the Primary Election is over. Sandra Fish at The Colorado Sun beat us to it, so we’ll start there:

Democrats now hold a 20-15 advantage in the Senate.

They are guaranteed 12 seats, with 11 holdovers and one Democratic candidate, Sen. Julie Gonzales of Denver, running unopposed.

Republicans are guaranteed eight seats, with seven holdovers and one uncontested race in Senate District 1 on the deeply Republican Eastern Plains, where Logan County Commissioner Byron Pelton is unopposed.

That leaves seven seats that are possible pick-up opportunities for the GOP, according to Cnalysis, which ranks the competitiveness of state legislative contests.

We’ve never heard of “Cnalysis,” but seven is an incorrect number of potential GOP pickup opportunities. SD-15 is currently held by Republican Sen. Rob Woodward; the district will likely be very competitive in 2022 (Janice Marchman is the Democrat in the race), but a Woodward victory would only represent a “hold” for the GOP.

The rest of the list included in the Sun story is consistent with everything we’ve seen and heard recently. Here are the six races that will likely decide which party controls the State Senate in 2023 (listed in numerical order according to district number):

You probably noticed that there are a lot of incumbent legislators on this list. Democrats have five current State Representatives running for State Senate (Dylan Roberts, Tony Exum, Lisa Cutter, Kyle Mullica, and Tom Sullivan). Democratic Sen. Nick Hinrichsen is sorta an incumbent since he was appointed in February to fill the remainder of the term vacated by Leroy Garcia. Republican Sen. Dennis Hisey is also sorta an incumbent; while he is a current State Senator, Hisey is running in 2022 in a different district because of redistricting.

In order to take control of the State Senate in 2023, Republicans need to win three of the six seats above while holding all of their current seats (including SD-15).