The Reviews Are In: The Ganahl/Moore Ticket Bombs 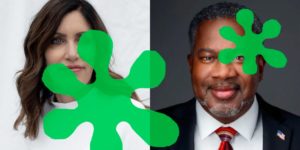 We noted on Friday that the first public appearance for Republican gubernatorial candidate Heidi Ganahl’s running mate did not go well. Ganahl formally introduced Danny Moore, her choice for Lieutenant Governor (LG), at an event in Aurora in which reporters were both invited and shunned. The Ganahl campaign ludicrously explained that neither Ganahl nor Moore had “time” to take questions from journalists; those reporters who tried to do their jobs anyway, such as Alex Burness of The Denver Post, were quite literally shoved aside.

If the Ganahl/Moore ticket were an attempt at a blockbuster movie release, it would rank somewhere between “Jaws: The Revenge” and “Battlefield Earth.” Both The Durango Herald and The Aurora Sentinel were as gobsmacked as everyone else by both Ganahl’s bizarre selection for LG and the sloppy process that preceded the announcement.

Here’s the editorial board of The Durango Herald on Saturday asking, “Who exactly is Heidi Ganahl?“:

It’s a bit of a surprise that Heidi Ganahl, Colorado’s Republican nominee for governor, selected an election denier as her running mate. Navy veteran and business consultant Danny Moore was booted from his role as chairman of the state’s Independent Congressional Redistricting Commission after Facebook posts surfaced in which he wrote that President Biden was “elected by the Democrat steal.”

Throughout Ganahl’s run up to the primaries, she ranged from gingerly sidestepping to outright refusing to answer questions about whether Biden was legitimately elected. Ganahl instead focused on economic and safety issues. We imagined her to be a reasonable, moderate Republican.

Now, we don’t know who she is. For Ganahl to choose her running mate, someone who lost a leadership position because of election-fraud posts, is downright bizarre. [Pols emphasis]

The Herald eventually comes to a realization that we have reached in this space: Perhaps Ganahl really is a true believer in the “Big Lie” and the idea that the 2020 election was fraudulent:

Maybe she’s intending to reach more of a conservative base. Maybe Ganahl is a closet election denier. We don’t know because so far, Ganahl hasn’t come clean on her innermost political beliefs. [Pols emphasis] To build trust, voters need to know who they’re dealing with, no matter their political affiliations. Otherwise, we’ll make assumptions based on the company she keeps.

Dave Perry, the editor of The Aurora Sentinel, also came to a similar conclusion in a recent editorial:

Rational people and moderate Republicans don’t hitch their political wagons to people who tell everyone President Joe Biden stole the election from Donald Trump in 2020.

And here’s the knockout blow:

As for wanting to focus now on policy differences between Polis and the Ganahl regime, that train left the credibility station she set on fire yesterday [July 18].

Colorado voters looking for a credible alternative to Polis as the next governor, a candidate who can be trusted not to sell out our state and democracy to the Trumpist insurrectionists, are going to have to look down ballot this fall. [Pols emphasis]

These two editorials, from different parts of the state, show how a statewide campaign can indeed bring people together. There is widespread agreement, in fact, that Heidi Ganahl should not be Colorado’s next Governor.