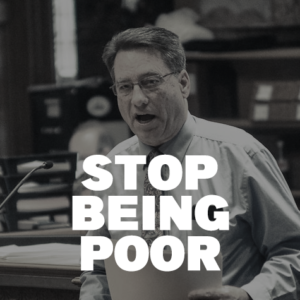 Thanks to a law recently passed by Democrats, everyone in Colorado who filed an income return tax last year, no matter how much they made, will be receiving a $750 refund.

But a Republican lawmaker says it would probably be “more equitable” to send bigger tax-refund checks to Coloradans with high incomes — and less money to lower-income folks.

“The way they distribute that money is probably not the most equitable way,” said Sen. Jerry Sonnenberg, a Republican from Sterling, on conservative talk radio Friday. “The guys that pay in the most, still only get the same amount as you and I.” So he’s saying the rich deserve more money back because they paid more taxes.

Sonnenberg is correct, that, if not for the Democrats’ legislation in April, taxpayers with higher incomes would be getting a fatter tax refund check, while the checks of lower-income and middle-income earners would be for smaller amounts.

And that’s the way it should be, says Scott Wasserman, director of the Bell Policy Center, a research group focused on economic opportunity.

“Conservatives have thus far completely tried to avoid talking about how the legislature chose to rebate these funds through a much fairer refund mechanism that gives those who are struggling a bigger amount of economic relief than they would have otherwise received,” said Wasserman via email.

This year, Colorado was required to refund billions of dollars to taxpayers because tax revenue exceeded limits set under TABOR, or the Taxpayer Bill of Rights, which is an amendment to the Colorado Constitution.

Wasserman’s group calculates that 62% of Coloradans — those with incomes of $91,000 or less — will receive a larger TABOR refund than they would have if the Democrats hadn’t adjusted the refund formula.

And, if not for the legislation, taxpayers would have received the refund next year, not now, a change that allows taxpayers to receive the money when many are struggling, say Democrats.

During his radio July 15 radio interview, on KFTM in Fort Morgan, Sonnenberg went on to criticize Polis specifically for celebrating the Democrats’ law directing more money to lower-income people.

“Isn’t it incredible that the governor is taking credit, the guy that hates TABOR so much, is taking credit now for the TABOR refund, giving people money back,” said Sonnenberg on air, “when in fact, TABOR in the Constitution says, ‘Look, if you take too much money in, you get this money back.’”

Sonnenberg, who wants to reduce income taxes so people can “keep their own money,” fails to recognize that giving more TABOR money to low-income people, instead giving more to the rich, reflects the broad approach that’s needed to make Colorado’s tax code fairer, according to Wasserman. Wealthy taxpayers also typically have access to other opportunities for lowering their tax burden by virtue of owning stocks, businesses, and real estate through lower rates and rebates that aren’t available to most working Coloradans.

“Unlike Sen. Sonnenberg, most Coloradans actually have 750 reasons to support a fairer tax code,” wrote Wasserman. “In most spaces, [conservatives] seem determined to evade any discussion of how lopsided across-the-board income tax cuts are and how much of a windfall it is to the top 1% of taxpayers.”

“Sen. Sonnenberg is a long-time proponent of flat income tax cuts and now we can see why,” Wasserman continued. “If he gets his way, we’ll have less of a TABOR rebate in the future, with more of it going back to the wealthy and less of it available for broad economic relief or funding community services that most of us rely on like schools, roads, and public safety.”

Wasserman says the Democrats’ hostility toward TABOR is justified.

In large part because of TABOR, Colorado’s budget will not be able to maintain current levels of services in “just a few years,” according to Wasserman’s group. Even if TABOR refunds diminish in future years, as expected, they will undermine Colorado’s ability to invest in community needs, states the Bell Policy in a fact sheet.

Sonnenberg, who’s leaving office next year due to term limits, didn’t return a call seeking to know if he thinks high-income earners actually need a larger tax refund than lower-income Coloradans — and if he thinks giving them more money would be better for the economy and the community.