ICYMI: The Farce Of “Democrats For Heidi”

The press release went out Friday from Heidi Ganahl’s campaign, though most local media missed it:

Heidi Ganahl is pleased to announce a new coalition of Colorado Democrats voicing their support for her campaign for governor. This group is made up of a growing number of Democrats who agree that Colorado is moving in the wrong direction under Jared Polis’ leadership, including Las Animas County Commissioner Luis A. López II, who has endorsed Heidi Ganahl for Governor.

The Democrats for Heidi Coalition is led by Derek Ayers, a Combat Veteran and Medical Services Officer for the 10th Mountain Division and father of two.

“I believe Jared Polis is incapable of unifying Colorado. He does NOT have my best interests or the interests of my children at heart. Polis is divisive and is ruining Colorado for all who call Colorado home.” 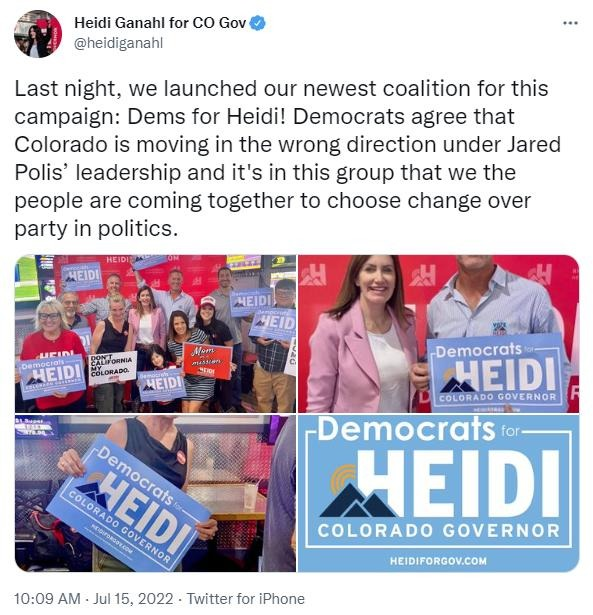 We count a total of nine adults in the photo in the upper left of Ganahl’s Tweet. One of them of course is Ganahl. And in the far left of the photo, there’s another familiar face: 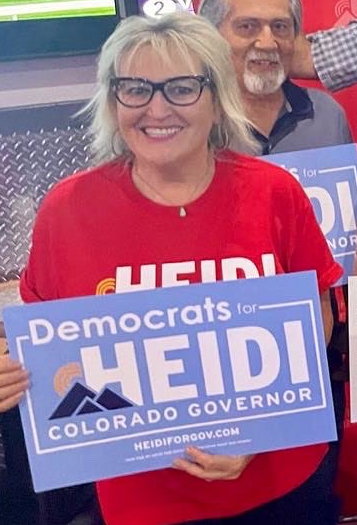 That’s Lynn Gerber, the Republican candidate for Colorado Senate who lost to Rachel Zenzinger in Arvada’s Senate District 19 in the 2020 elections. Gerber is not merely a registered Republican, but a full-blown QAnon wackadoodle who promoted a video about “COVID 911: The DEEP STATE Insurgency” during her campaign.

Not to mention, there’s only seven.

In maximum fairness, in the release Friday announcing the “Democrats for Heidi” initiative, the campaign disclosed the first names, last initials, and hometowns of (wait for it) twenty-seven “Democrats for Heidi.” We suppose the campaign can rightly claim there’s a valid safety reason for concealing their last names, but of course this makes it much more difficult to verify who they are, whether they support Ganahl, and (key point here) whether or not they’re actually Democrats.

And again, only twenty-seven? That says more than anything.

In every political campaign, even the successful ones, there’s always a ploy or two that misfires.

With Heidi Ganahl, every ploy is a misfire. In this sole and sad respect, she is truly exceptional.