Pinballing: Inside Heidi Ganahl’s Most Mixed of Messages

We’ve spent some time during this primary election season discussing the work product of a particular local political reporter, Shaun Boyd of CBS4, not due to the quality of her journalism but the revealing manner in which Boyd has maneuvered to openly assist the institutionally favored Republican candidates running for the party’s nomination in the U.S. Senate and governor’s races. In Boyd’s latest helpful act on behalf of favored Republican candidates, a profile aired last night of gubernatorial candidate Heidi Ganahl that allowed Ganahl to uncritically re-invent herself once again on the bedeviling subject of the 2020 presidential election:

Ganahl has refused to say whether the election was stolen, until now, “I don’t believe enough fraud flip the election but a lot concern and a lot of unnerving things that happened.”

She says she understands people’s concerns with last-minute changes to election laws in many states. She also, for the first time, acknowledged that CU should not have hired John Eastman, who White House insiders say conspired with former President Trump to overturn the election.

As CU Regent, Ganahl exchanged multiple emails with the former visiting professor in an attempt to arrange a luncheon that she says never happened, “I don’t know enough about what he’s done but I don’t think it’s been good for CU, but looking back he had a very stellar career before we brought him on as a visiting professor so hindsight is 20-20.”

This is the first time we know of Ganahl has been described–note that we don’t have her explicitly quoted–as saying that CU Benson Center conservative scholar John Eastman was a mistake for CU, an about-face from Ganahl’s defense of Eastman from being fired in the aftermath of the January 6th insurrection. Ganahl’s grudging and qualified admission that there wasn’t “enough fraud” in 2020 to change the election results is likewise an evolution from her previous statements, at least the ones made in public and not at private events into hidden mics. Boyd does note as several local media outlets have that Ganahl and Eastman exchanged email correspondence in an attempt to meet, ultimately foiled when Eastman contracted COVID-19 by his own admission from Donald Trump’s team working to overturn the 2020 elections. 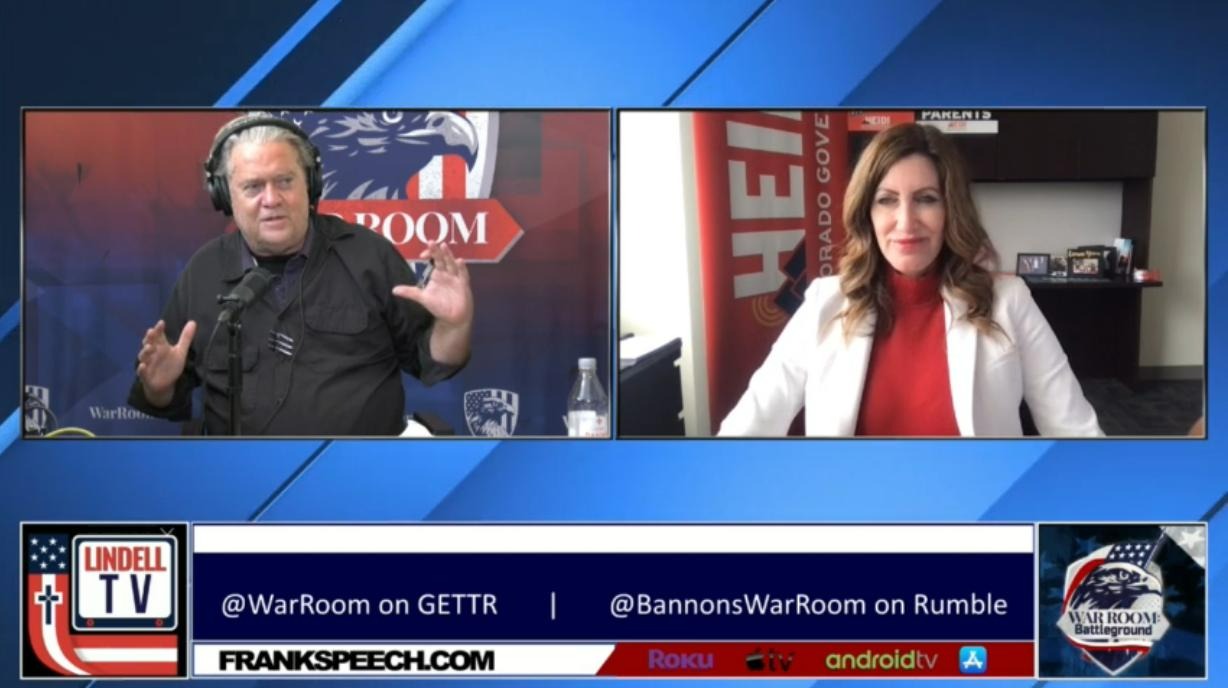 On “MyPillow Guy” Mike Lindell’s Lindell TV, with leading election conspiracy theorist Steve Bannon–the same Steve Bannon whose War Room website hosted an op-ed from Ganahl earlier this week on “protecting the children.” Steve Bannon, as readers know, is up there with John Eastman himself in terms of a leading role in the January 6th coup plot–one of very few Americans who can say so. To be interviewed by Steve Bannon on Lindell TV is to wallow in the deepest, dankest pit of the fringe Ganahl tried to distance herself from in her CBS4 interview. The only thing missing would be a cameo appearance from Secretary of State candidate Tina Peters.

At this point, it’s totally impossible to reconcile the contradictory messages Ganahl is sending, counting on the audiences having little or no overlap. Sucking up to Steve Bannon is a desperate attempt to appeal to the far right in the Republican primary, despite the huge liability this creates for Ganahl if she prevails. Ganahl has abandoned the advice she gave the far right (and herself) to stay “so focused” on her economic message that there’s no time to talk about these “divisive questions.”

The single frame of video above says everything November’s voters need to know.