One of the more interesting results coming out of Colorado Republicans’ historically crazy assemblies this year was the unexpected (and ultimately short-lived) ouster of Rep. Mary Bradfield, an incumbent Republican state representative in a relatively safe Republican district by Karl Dent, a hard-right grassroots favorite who turned out to have a substantial train of baggage in tow. A lawsuit filed by infamous election attorney Scott Gessler successfully sought a do-over of the assembly vote, in which Bradfield received enough support to force a primary election on June 28th after all.

Having gotten their mulligan, Republican donors are opening their wallets bigly to ensure the HD-21 GOP primary election goes their way–that is, against the overwhelming preference of the party faithful at the assembly: 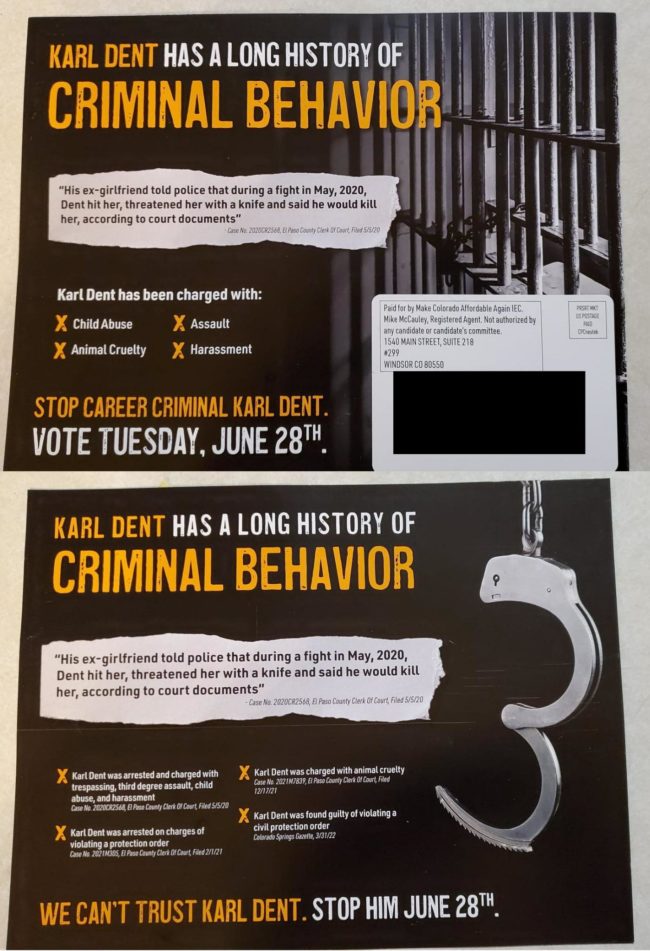 That’s about as nasty a mail piece as they come–but if the kompromat wasn’t real, it wouldn’t exist.

And for good measure, lots of positive glossy color air cover for Bradfield: 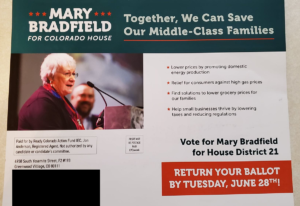 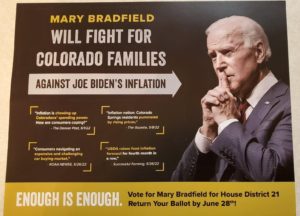 This is a lot of money being spent on a primary with no strategic value for Republicans, but given Dent’s unsavory history it’s money they really have no choice but to spend in order to prevent an even greater embarrassment next January–when Rep.-elect Dent would result in major controversy before even being allowed to take his seat. It’s still not entirely clear to us what Rep. Bradfield did to earn the ire of the grassroots in her district, but she admits to not having done much in the way of retail campaigning ahead of the state assembly. In that vacuum, a MAGA hard-liner was waiting to take advantage.

Now Republicans have to divert precious time and capital making it right, against the will of their own.

It won’t get the attention it deserves, but the GOP’s pickle in HD-21 says a mouthful.