Will Republican Voters Split the Primary Ticket? Probably Not 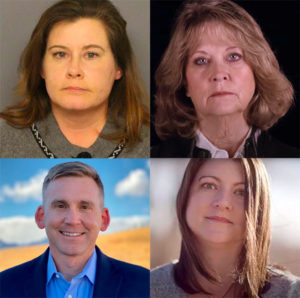 Ballots for the June 28th Primary Election are already being returned after being mailed out to voters early last week. Most of the action this month is on the Republican side, where there are an exceptional number of GOP battles that need deciding. In fact, we can’t recall a recent time when Colorado saw this many competitive Primary races for high-profile offices in the same election cycle.

We’ve heard persistent rumors recently that the race for the Republican nomination in CO-08 is essentially now a two-candidate battle between Weld County Commissioner Lori Saine and State Sen. Barbara Kirkmeyer. Thornton Mayor Jan Kulmann continues to generate little interest, and not a lot of people have ever heard of a “Tyler Allcorn.”

Much of the discussion in GOP circles still centers around the “Big Lie” — the idea that the 2020 Presidential election was “stolen” from former President Donald Trump. As we’ve written many times in this space, years of Republican support for the “Big Lie” is a big problem for the Colorado GOP. And while the “Big Lie” is rapidly falling apart amid the Congressional hearings investigating the Jan. 6, 2021 insurrection, it’s unlikely that these discussions will change a lot of minds before most of the votes are cast in the June Primary Election.

Rumors about a Saine/Kirkmeyer showdown in CO-08 got us thinking about what sort of crossover impact might or might not happen in other top GOP battles. In short, our question is this: To what degree might Republican voters split their ticket between “Big Lie” adherents and those who dance around the topic? 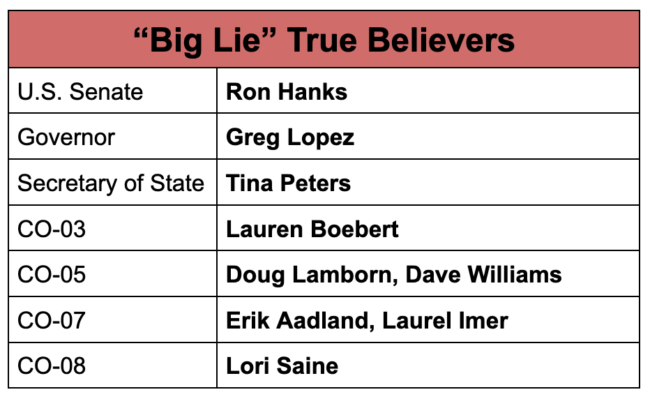 For example, if a voter supports Saine in CO-08, should we assume that they are also going to back Ron Hanks for U.S. Senate, Greg Lopez for Governor, and Tina Peters for Secretary of State? The question works no matter which order you list the candidates; if you like what Peters is selling, is it safe to assume that you are also backing Hanks and Lopez? This is definitely a bet we’d be comfortable making.

Sure, there are going to be exceptions to this (or any) rule of thumb, but in general it makes logical sense that “Big Lie” believers are going to back the “Big Lie” candidates.

What happens with the Republican candidates who dance around the “Big Lie”? This group, which we call the “Big Lie Fence Sitters,” don’t explicitly say that the 2020 election was stolen from Trump but spend a lot of time talking about non-existent voter fraud and questioning the security of our elections in broad terms. A voter who leans toward believing the “Big Lie” could potentially talk themselves into backing a “Big Lie True Believer” in one race and one of these candidates on the next line.

Then there are the Republicans whom we call “Big Lie Non Believers.” Senate candidate Joe O’Dea, Secretary of State hopeful Pam Anderson, and CO-08 challenger Jan Kulmann have been (relatively) clear that they don’t believe the 2020 election was fraudulent. All three of these candidates also flirt with the idea that our elections need greater security or transparency, but overall they stay away from suggesting that Democrat Joe Biden is not the “legitimate” President of the United States.

Again, there will be exceptions, but it wouldn’t make a lot of sense for someone who likes Mesa County Clerk and Recorder Tina Peters to also back O’Dea (as one example).

This brings us back to the rumors in CO-08 that the Primary outcome will come down to Saine or Kirkmeyer. If the race does shake out this way, this is almost certainly bad news for the likes of O’Dea and former Jefferson County Clerk and Recorder Pam Anderson. If something similar is happening in CO-07 as well, then O’Dea, Anderson, and Ganahl are all in serious trouble.

Perhaps Republican Primary voters in Colorado will decide in large numbers to dismiss the “Big Lie” and vote in a different direction, though that would be at odds with everything the Colorado GOP has been advocating since November 2020. No Republican candidate has long enough coattails for others to ride out this storm.