Get More Smarter on Monday (June 6)

Get outside and enjoy what looks to be a lovely week of weather in Colorado. While you apply sunscreen, let’s Get More Smarter. If you think we missed something important, please include the link in the comments below (here’s a good example). If you are more of an audio learner, check out The Get More Smarter Podcast. And don’t forget to find us on Facebook and Twitter.

► Republican Senate candidate Joe O’Dea seems to have figured out that the June 28th Primary Election is just around the corner (in fact, mail ballots started going out today). As The Colorado Sun reports, O’Dea has a new campaign manager and has written a big check to his campaign for a late advertising blitz intended to get him over the hump against fellow Republican State Rep. Ron Hanks:

O’Dea’s campaign for U.S. Senate is making a major push heading into the June 28 Republican primary, spending more than $300,000 on television and radio ads over the next three weeks as he begins attacking his GOP opponent, U.S. Rep. Ron Hanks, in earnest.

O’Dea, a wealthy, self-funding first-time candidate who owns a Denver construction company, has also hired a campaign manager with experience working on political races across the country.

Perhaps Roday can get O’Dea to start taking some actual positions on important issues.

Colorado Newsline and 9News have more on how various Republican candidates addressed issues such as abortion rights and gun violence at the WCS event.

► The Colorado Secretary of State’s office has ruled that a political donation from Republican activist Michael Fields to the campaign of Republican Attorney General candidate John Kellner is likely a campaign finance violation. Click here (Kellner-Fields-Complaint) to read the decision (PDF).

► Mesa County Clerk and Recorder Tina Peters may be just weeks away from winning a Republican Primary for Secretary of State, but that won’t help her legal woes. As Charles Ashby reports for the Grand Junction Daily Sentinel:

In responding to a motion from Peters’ and Knisley’s attorneys asking Barrett to review the case to see if there were reasonable grounds to investigate and indict, the judge revealed numerous aspects of that investigation, something that is somewhat unprecedented because grand jury probes are highly secret.

In it, Barrett wrote that, over the course of five days, the grand jury heard testimony from numerous witnesses and saw about 60 exhibits.“The acts and/or omissions of Knisley and Peters, as public officials, constituted the crimes of violation of a duty, failure to comply with the requirements of the Secretary of State; and also for Peters, first-degree misconduct,” Barrett concluded in his review. “The record supports a finding of probable cause for these allegations.”

One of the witnesses the grand jury heard was Fruita resident Gerald Wood, whose identity was used by a still-unknown person who was authorized by Peters and others in her office to gain access to secure areas of the county’s election division.

► Mario Nicolais of The Colorado Sun thinks Colorado voters might be better off registering as “Unaffiliated,” which was probably not intended as a plug for the Sun’s political newsletter of the same name.

► British Prime Minister Boris Johnson faces a vote of “no confidence” today after members of his own Conservative Party expressed disgust with his leadership. If the vote succeeds — and political analysts seem to think it won’t — then Johnson would be out as Prime Minister. There is no obvious successor should Johnson lose today’s vote.

The New York Times has more on how things went south for Johnson.

► As Meg Wingerter reports for The Denver Post, experts still aren’t sure how or why “long COVID” is impacting many Coloradans.

Two years after the first COVID-19 patients raised alarms that symptoms could last for months, it’s clear the phenomenon is common — but medical experts still don’t know much about what causes it or how to treat it.

A study from the Centers for Disease Control and Prevention looking at 353,000 COVID-19 survivors found that about one in four who are 65 or older and one in five adults younger than 65 developed a new health condition that could be related to their bout with the virus.

There’s not much data about why some people are stuck with symptoms months after most COVID-19 patients have recovered, or when they might expect to feel better, though.

Diagnosing what’s become known as long COVID is mostly a process of ruling out everything else that could be causing a patient’s symptoms, said Dr. Thomas Campbell, a professor of medicine at the University of Colorado School of Medicine and chief clinical research officer at UCHealth.

► Things are going to be pretty dry in Colorado by the year 2080, according to Climate Change researchers.

► Congresswoman Diana DeGette (D-Denver) is getting a good response in the House of Representatives as she tries to move forward legislation banning high-capacity magazines on firearms. Some key U.S. Senators say that gun violence legislation might move forward, though likely in a very watered-down version.

► Colorado Public Radio previews the race for Congress in CO-06…such as it is. Democratic Rep. Jason Crow is a virtual lock to win re-election in 2022.

► As John Frank reports for Axios Denver, Colorado social conservatives (for some reason) think 2022 is their year for victory in our state.

► Proving once again that there is no stoop too low, Republican gubernatorial candidate Greg Lopez agrees that former President Barack Obama is “not a true black man.”

► As POLITICO reports, two Republican incumbents in California could be in trouble ahead of Tuesday’s Primary Election.

► New York Gov. Kathy Hochul signed legislation making it illegal for anyone under the age of 21 to purchase a semiautomatic rifle in the state.

► A federal judge gave approval for Oklahoma to proceed with its lethal injection method for executing more than two dozen death row inmates. 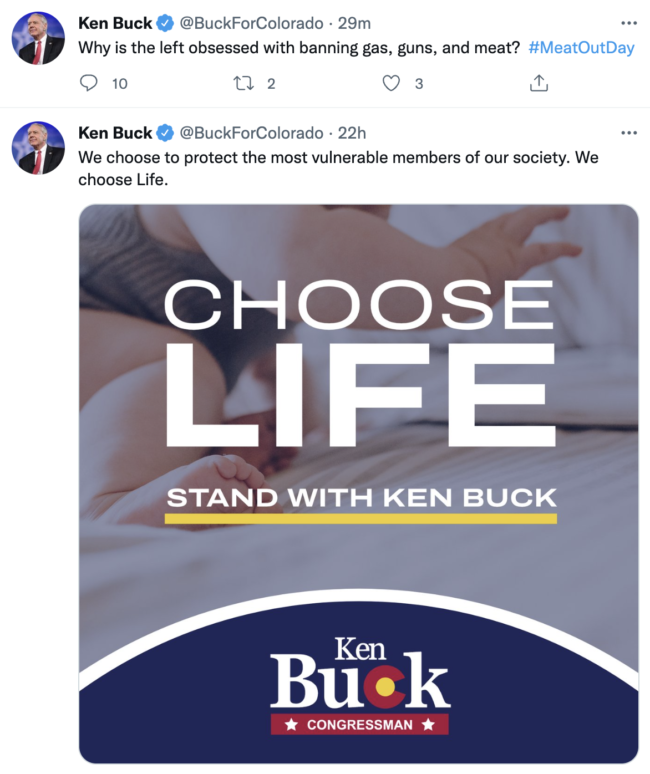 ► Blake Masters, a Republican candidate for U.S. Senate in Arizona who has the support of Donald Trump, says that gun violence is mostly a problem for “Black people, frankly.”

► Heidi Ganahl touts an endorsement for her campaign for governor…in Michigan?

► State restrictions are already having a significant impact on abortion rights throughout the United States.

► Colorado Gov. Jared Polis does not agree with Australia’s claim that it is home to the largest plant in the world. Polis thinks Colorado’s Aspen trees deserve this title.

► Check out the latest episode of the Get More Smarter Podcast, featuring an interview with Rep. Tom Sullivan, perhaps Colorado’s most prominent gun safety advocate and a State Senate candidate: