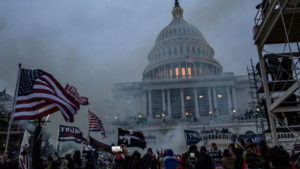 The committee investigating the Jan. 6, 2021, attack on the Capitol by a pro-Trump mob has subpoenaed five Republican members of Congress, including House Minority Leader Kevin McCarthy (Calif.), after they refused to cooperate with the panel’s inquiry.

The move marks a significant escalation in the committee’s efforts to obtain information related to lawmakers’ communications with then-President Donald Trump and White House Chief of Staff Mark Meadows before, during and after the attack.

In a statement, Thompson said the committee “has learned that several of our colleagues have information relevant to our investigation into the attack on January 6th and the events leading up to it.”

While Congressperson Lauren “Q*Bert” Boebert didn’t make the first round of subpoenas, it wouldn’t be a shock to learn that she is next on the list.

There are, however, some Colorado connections to the initial list of names included on the Congressional subpoenas. Arizona Republican Rep. Andy Biggs was THE KEYNOTE SPEAKER at the State Republican Party’s annual fundraising dinner last month. And just last summer, Republican Rep. Jim “Gym” Jordan visited Colorado at the behest of Boebert.

We suppose it’s neat that Colorado got to see two of the key insurrectionist players in person before their schedules started to really get busy.