Well, That Was Stupid 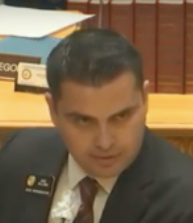 In a Wednesday morning ruling, Denver District Judge Andrew McCallin said that Williams proved proper use of “Let’s Go Brandon” as a nickname, but that Democratic Colorado Secretary of State Jena Griswold used proper authority to disallow it from being used on the ballot.

We’ve already spent more time on this than it deserves. He’ll get a few primary votes for the attempt.

And we’re all a little dumber from the experience. Carry on.