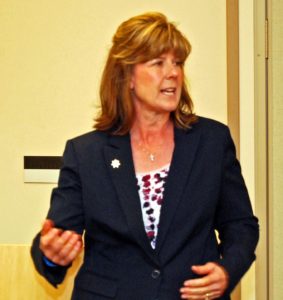 Following a story that’s been on slow-burn for some weeks now, the Colorado Democratic Party sent out a release today slamming Republican attorney general candidate John Kellner for letting Holly Kluth, a Republican candidate for Douglas County Sheriff and nearly-maxed out campaign donor to Kellner, skate after investigators recommended charges of official misconduct:

“Our elected leaders are supposed to follow the law without fear or favor, but John Kellner has tarnished that public trust. Kellner should take immediate steps to restore public confidence in his office and ensure Coloradans that his prosecutorial decisions are based on a person’s conduct, not their political contributions,” said Morgan Carroll, chair of the Colorado Democratic Party. “Kellner should immediately return the money he took and institute safeguards that prevent even the appearance of favored treatment by campaign contributions from facing possible criminal charges. Kellner must also immediately disclose any and all other instances in which he failed to bring charges against his campaign contributors.”

The District Attorney for the 18th Judicial District, Kellner is under fire for refusing to prosecute his campaign donor, Holly Kluth, despite an independent investigation finding wrongdoing from the Jefferson County Sheriff’s office. Kellner likewise refused to recuse himself from the case despite the potential appearance of a conflict of interest. Kluth had been under investigation for official misconduct in her role at the Douglas County Sheriff’s office — allegations so severe that her office requested the investigation be conducted by a neighboring jurisdiction.

The scandal has led to a call for official investigations into Kellner for violating the Colorado Rules of Professional Conduct for lawyers as well as for prosecutorial misconduct for failure to disclose a conflict of interest. After the alleged misconduct occurred in 2019, Kellner accepted two donations from Kluth in 2020. In October of 2021, despite being called on to bring official misconduct charges, Kellner declined to file charges against his campaign donor and has yet to answer questions as to why…

The simplest explanation why, of course, is the worst-case scenario–which is why we don’t expect questions about Kellner’s prosecutorial generosity toward his near-maximum campaign donor and Republican political ally to go away, certainly not until Kellner fully explains the timing and reasoning behind his decision to ignore the recommendation of outside investigators. Donations provide a ready quid pro quo but in this case we’re more inclined to think the political alliance between Kellner and Kluth against their common much-maligned adversary Douglas County Sheriff Tony Spurlock is the tie that binds.

One misconduct can cover up another, but two misconducts exposed are double the trouble.