Boebert Proves that “Fentanyl” is Mostly a Talking Point for 2022

Congressperson Lauren “Q*Bert” Boebert (R-ifle) has absolutely no idea what she is talking about when it comes to the Fentanyl issue being discussed at the state legislature this week. Boebert’s confusion will not likely come as a surprise to anyone reading these words, but it is instructive nonetheless. 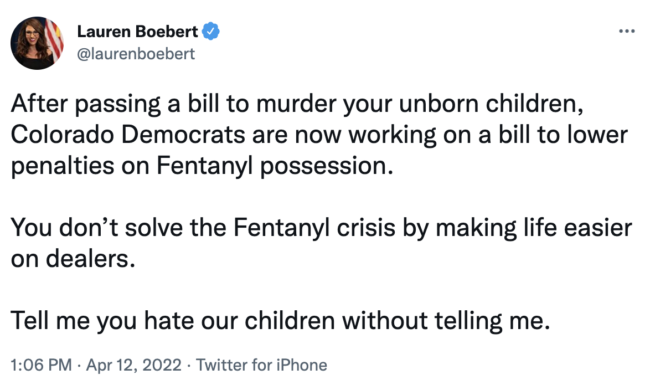 Boebert is off by about 180 degrees here. As Faith Miller of Colorado Newsline Tweeted in response:

As anyone who has been following the discussion can tell you, Colorado lawmakers are doing the complete opposite of what Boebert is accusing. The legislation being discussed would INCREASE penalties for Fentanyl distribution. The argument serious people are having is about whether changing the penalties for Fentanyl possession in any way will help cut down on illegal (and deadly) Fentanyl use in Colorado.

Perhaps Boebert is intentionally lying about the situation in order to pick up a few more re-tweets, though we’d argue that the simpler explanation is more likely: Boebert probably doesn’t really have any idea what is true and what is not. She just knows that she is supposed to cram the words “Fentanyl” and “Democrats” together in a negative sentence because that’s a message Republicans think can help them in 2022.

We don’t doubt that there are some Republicans who really do want to solve this problem, but it’s beyond clear that the bigger concern for most in the GOP is keeping the narrative alive so they can hammer it with television ads in the fall.

Sometimes even Boebert tells the truth…just not necessarily on purpose.