We’ve gotten occasional press releases in the last few months from a Republican-aligned “independent” political activist group named Compass Colorado. They haven’t been around for very long, having made their first media splash around the easy-pickings defeat of Proposition 103 last fall. Heading up Compass Colorado is Tyler Q. Houlton, a former communications director for Rep. Tom Tancredo.

Apparently, Compass Colorado has received some funding to produce a web video, attacking President Barack Obama’s record on unemployment with “Colorado specific” facts and figures. It’s not really very well-produced, so we’ll let you find it on Youtube. Or, visit Compass Colorado’s homepage, where the video automatically pops up. They’re quite proud of it.

0:32 into their minute-long video uploaded on Monday, they flash this graph on the screen: 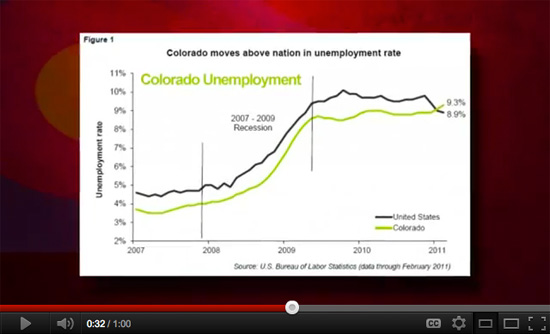 Which shows a very brief period at the beginning of 2011 where Colorado’s unemployment rate exceeded the national average. While the graph is displayed, the narrator voices over: “Here in Colorado, tens of thousands of jobs have been lost since Obama took office.”

So, there are a couple of remarkable things about the graph shown above. First of all, Compass Colorado appears to have stolen this graphic, without attribution, from the website of the Colorado Center on Law and Policy: one of the principal thinktanks in the coalition that backed Proposition 103! Isn’t it a little embarrassing to lift your opponent’s material this way?

But that’s not the worst part by a long shot. Because if you go to the website that the year-old graphic you see above was stolen from, you see…well, you see this: 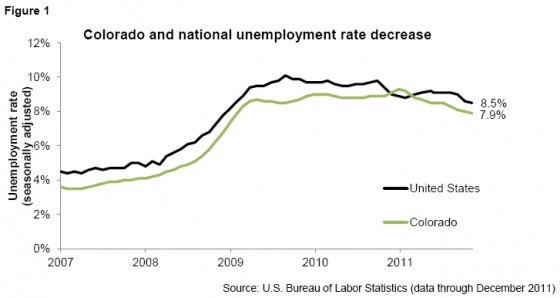 Now, you remember when we told you above that this video was uploaded on Monday, right? And yet they used a graph from a year ago instead of the most up to date one? Without attribution, so you’d have no way to find the updated information? Which paints a vastly different picture than a year ago, where Compass Colorado just stopped counting?

Folks, it’s not often that the public’s intelligence is this grievously insulted.