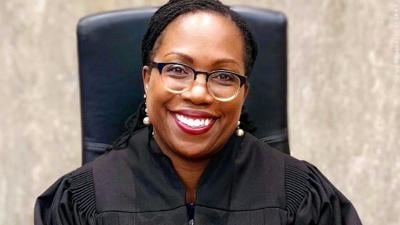 AP reporting via the Aurora Sentinel, President Joe Biden has made good on his promise to select the nation’s first African-American woman U.S. Supreme Court Justice to succeed retiring liberal Justice Stephen Breyer, and to do so by the end of this month:

President Joe Biden on Friday will nominate federal appeals court Judge Ketanji Brown Jackson to the Supreme Court, the White House said, making her the first Black woman selected to serve on a court that once declared her race unworthy of citizenship and endorsed segregation…

Senate Judiciary Committee Chairman Dick Durbin said in a statement that the panel will “begin immediately” to move forward on the nomination and that Jackson is an “extraordinary nominee.” Senators have set a tentative goal of confirmation by April 8, when they leave for a two-week spring recess. Hearings could start as soon as mid-March.

That timeline could be complicated by a number of things, including the ongoing developments between Russia and Ukraine and the extended absence of Democratic Sen. Ben Ray Lujan of New Mexico, who suffered a stroke last month and is out for several weeks. Democrats would need Lujan’s vote to confirm Biden’s pick if no Republicans support her.

By all accounts one of the nation’s finest legal minds and as accomplished any as current member of the court, we would hope to see a few reasonable Republicans willing to make the confirmation process for Ketanji Brown Jackson trouble-free. We can hope for that, especially since the balance of the Court is not in jeopardy–but after years of treachery from Republicans in the process of selecting Supreme Court Justices going back to the punking of Merrick Garland in 2016, we have no reason to expect it.

We’re enthusiastic about the choice itself, of course, and congratulations on further history made today.