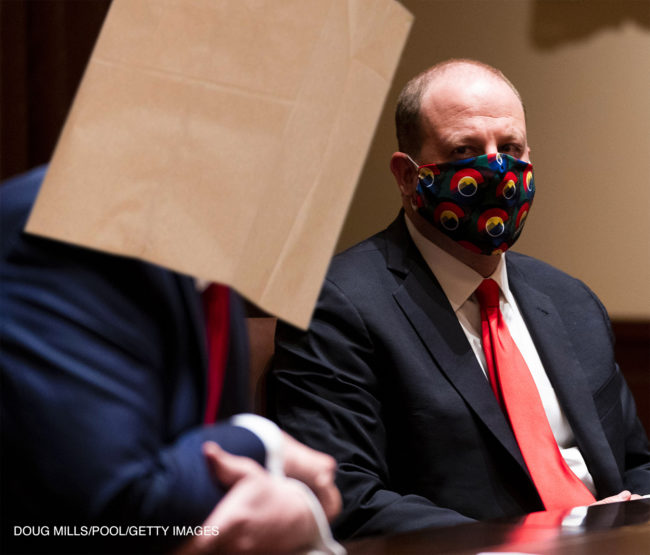 Despite the hope as 2021 began that the world would finally see relief from the COVID-19 pandemic, we’re ending the year with a new variant of the virus tearing at record speeds through the population. As of today almost 820,000 Americans have died from COVID-19, a number that includes just over 10,000 dead here in Colorado. Across the nation, differing responses by state governments have led to a stark disparity in death rates from the pandemic, ranging from an extreme of 348 per 100,000 in Mississippi to very low rates of 75 and 71 deaths per 100,000 people in Hawaii and Vermont respectively.

In Colorado, we’ve done better on the whole than most states through the pandemic’s successive waves: 40th out of 50 states in COVID-19 deaths, a rate of 170 per 100,000. Economically, Colorado has bounced back well along with the rest of the country from the economic shock of 2020’s virus-imposed shutdowns, and many of the worst fears such as a massive revenue shortfall for the state and an eviction crisis as rental assistance phased out did not materialize.

Politically, the pandemic has represented a challenge for Colorado’s majority Democrats beyond the scope of anything imaginable before. The need for swift action to prevent the flooding of hospitals with sick and dying COVID patients in the spring of 2020 before vaccines and (credible) therapies were available met a wave of political resistance that, while always comprising a small noisy minority, succeeded in disrupting enforcement of restrictions since then–even as the harshest measures were dropped as quickly as possible.

Debate continues on how effectively this strategy was for Republicans at the polls, but the effect has been devastating in human terms. It is not hyperbole to argue that the politicization by Republicans of the response to COVID-19 is a principal cause of the United States having the most COVID-19 deaths of any nation on Earth. It is a transgression of a magnitude that most Americans, let alone most Republicans, are unable to fully process contemporaneously. That will be the job of historians.

Gov. Jared Polis is a progressive Democrat on the preponderance of issues, but he also has a well-known libertarian streak that has manifested itself to the consternation of some of his liberal colleagues like his call to replace income taxes with a range of new taxes that would better “capture wealth.” It’s fair to say that Gov. Polis was sensitive to the criticism he received over the lockdown and subsequent mask statewide public health orders, and that’s in part why he has been reticent to re-impose a statewide mask mandate during the current surge of cases caused by the Omicron variant. At the same time, however, the growing vaccinated population and therapeutics that have been proven to work have mitigated death and hospitalization rates even as case numbers spike once again.

Republicans have tried desperately to paint Gov. Polis as some kind of authoritarian dictator imposing his will by fiat, but the reality is that Polis has been very cautious and measured about imposing public health restrictions during the COVID-19 pandemic–to the point of drawing criticism from his left on several occasions. That reality just doesn’t fit with the right’s breathless narrative, and public polling shows that a majority of voters still trust Polis and the Democratic majority despite a year and a half of attacks from the right. Gov. Polis’ approval has “narrowed” to around +12, and at this point that looks like Polis’ floor going into next year’s elections. Fostering resentment against Colorado Democrats over necessary COVID restrictions didn’t work in 2020 when the lockdowns were much fresher in voters’ minds, and it’s not going to work to unseat Gov. Polis in 2022.

History will record that Jared Polis threaded a very difficult needle in a moment of historic crisis.

And at least with respect to COVID-19, history will be much less kind to Polis’ Republican critics.