Pat Neville’s Mask Lawsuit All About The Benjamins

As we we discussed last week and Colorado Public Radio reported, Republican House Minority Leader Patrick Neville threatened a lawsuit on Thursday in response to the statewide face mask executive order issued by Gov. Jared Polis, which came after weeks of pleading by public health authorities to take this additional step as COVID-19 cases grow in the state:

House Minority Leader Patrick Neville tweeted that Polis was “on a power trip,” and said he had hired attorneys with “the intent to sue” for an alleged violation of civil liberties, though he didn’t give any further details about the potential lawsuit.

In a separate written statement that didn’t mention legal action, Neville asserted that the order is unnecessary because Colorado’s COVID-19 infections, hospitalizations and deaths are still lower than their April peak.

Although Neville “didn’t give any further details” about his impending lawsuit against Gov. Polis’ mask order, yesterday on Facebook what’s probably the most important component of the whole operation went live. 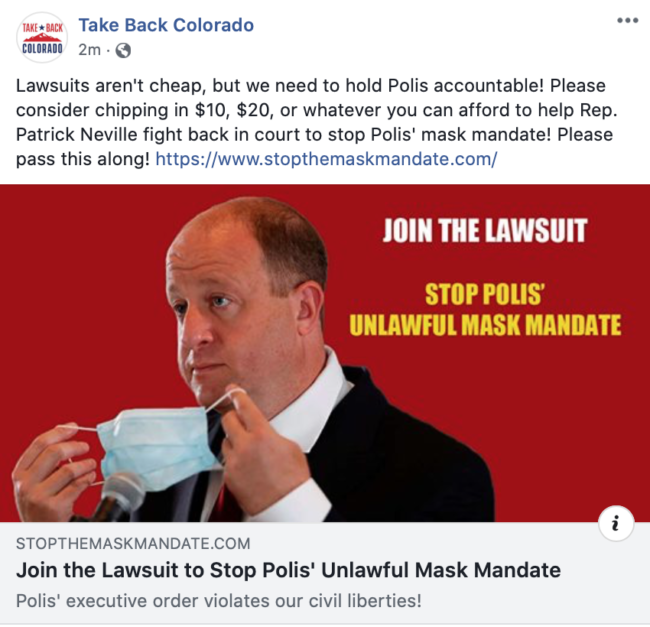 You knew this was coming: “lawsuits aren’t cheap,” and in this case as unlikely to be successful as any of the Neville political clans other recent failed stunts (see: recall of Rep. Tom Sullivan, et al)–but as the organizers of the stillborn recall attempt against Gov. Polis last year can tell you and P.T. Barnum can tell you, there’s a sucker born every minute! The Nevilles have figured out that win or lose, usually the latter, there’s cash to be raised by slapping Polis’ picture on an ad with the words “stop this guy.”

Democrats should of course celebrate Neville’s anti-mask crusade, since it further divorces the Republican brand from the mainstream majority of Coloradans who support masks and any other measure needed to slow the ongoing COVID-19 pandemic. Given the money spent by fellow Republicans during the recently-concluded primary to take out Neville’s favored House candidates, and a significant reduction in money flowing into the House GOP’s Neville-owned “independent” messaging group Values First Colorado, we don’t doubt that the Neville clan needs to get creative to make payroll.

As always, it is our sincere hope that nobody sends Pat Neville their welfare check.