Over the Thanksgiving break, Lauren Boebert said she was recently in a Capitol elevator with Ilhan Omar when a fretful Capitol police officer ran up.

Lauren Boebert said: “Well, she doesn’t have a backpack. We should be fine.” 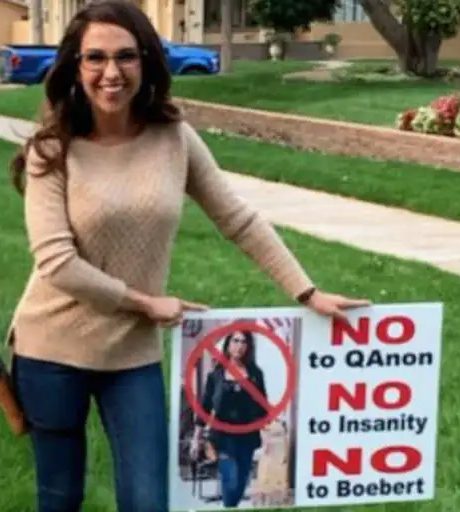 The Hill reports on the above video that went viral over the Thanksgiving holiday, of Rep. Lauren Boebert telling a story suggesting that fellow Rep. Ilhan Omar is feared by Capitol Police as a possible suicide bomber:

In the video, shared by a Twitter account called PatriotTakes, Boebert recounted an incident she said took place with Omar.

“So the other night on the House floor was not my first jihad squad moment. So I was getting into an elevator with one of my staffers. And he and I are – we’re leaving the Capitol. We’re going back to my office and we get in the elevator, and I see a Capitol Police officer running hurriedly to the elevator,” Boebert said in the video.

“I see fret all over his face, and he’s reaching… The door’s shutting, like I can’t – I can’t open it – like, what’s happening? I look to my left, and there she is. Ilhan Omar. I said, ‘Well she doesn’t have a backpack, we should be fine,’” she said as the audience in the video could be heard laughing…

During the debate over the censure of Rep. Paul Gosar of Arizona over a video he promoted depicting the death of Rep. Alexandria Ocasio Cortez, Boebert smeared Rep. Omar as a member of the “Jihad Squad” on the floor of the House and even brought up the false rumor that Rep. Omar had once married her brother. In response, Omar ripped Boebert as an “insurrectionist who sleeps with a pervert”–in reference to Boebert’s husband’s conviction for public indecency and lewd exposure, which unlike Boebert’s claims about Rep. Omar being a suicide bomber is a matter of record.

As for the exchange Boebert described above with a U.S. Capitol Police officer frightened at the prospect of sharing an elevator with Rep. Omar? Here’s Omar’s response to that:

Fact, this buffoon looks down when she sees me at the Capitol, this whole story is made up. [Pols emphasis] Sad she thinks bigotry gets her clout.

Well folks, sometime between the video of Boebert telling this story being posted on Thanksgiving morning and today, something we’ve never seen before finally happened: Lauren Boebert was persuaded to deliver the closest we’ve ever seen from her to an apology.

Let’s be clear that this is objectively speaking a terribly weak apology, not even directly to Rep. Omar but “anyone in the Muslim community” offended by Boebert suggesting that Rep. Omar is a terrorist. Hopefully Boebert delivers a more direct apology when she meets with Omar, because this hardly seems sufficient. With that said, this is still the first time we have seen Boebert offer any kind of apology after literally hundreds of occasions that called for one, and that’s highly significant. It indicates to us that somebody who Boebert cannot afford to alienate has finally had enough.

The question now is, does this half-apology go far enough to spare Boebert from sanction by the House like Reps. Marjorie Taylor-Greene and more recently Paul Gosar? Without Boebert’s seat on the House Natural Resources Committee, her value to her CD-3 constituents–not to mention her questionably generous benefactors in the oil and gas industry–pretty much evaporates. We have to think a threat of this magnitude is the only circumstance that could compel Boebert to do what Donald Trump considered unthinkable.

This apology, weak as it is, shatters Boebert’s image as an indefatigable slinger of red meat.

As it turns out, there is a limit.