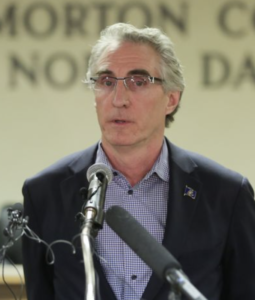 It’s time for another edition of our long-running series, “At Least They’re Not Your Legislator…”

This week we take you to North Dakota, where Gov. Doug Burghum just signed his name to legislation that prevents the teaching of “Critical Race Theory” in North Dakota.

Of course, Critical Race Theory WAS NOT BEING TAUGHT IN NORTH DAKOTA. This legislation was thus about as necessary as barring Bigfoot from owning a dental practice.

Unless the North Dakota schools plan to someday teach a third-year law-school curriculum, Critical Race Theory is not going to be wedged in there between English and Mathematics. Ever. But that’s the thing about bogeymen. They never sleep as long as they are useful. [Pols emphasis]

“Esquire” notes that the legislation was sponsored by a State Senator from Mott, North Dakota, which includes 2,382 people in a population that is 99.5% white.

As part of a special legislative session, Burghum also signed a bill to restrict vaccine mandates in his state. Unfortunately for North Dakota residents, COVID-19 DOES actually exist, so restricting vaccine mandates won’t help a state that has regularly posted some of the highest per-capita COVID death rates in the entire world.