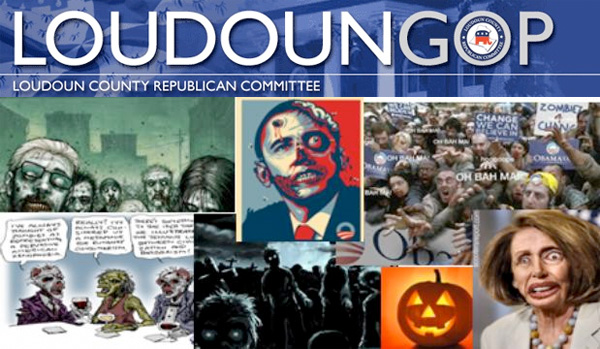 The Republican Party of Virginia is strongly condemning an e-mail sent by Loudoun County’s GOP committee that shows President Obama as a zombie with part of his skull missing and a bullet through his head.

“The disgusting image used today on a mass e-mail has no place in our politics. Ever,” said Pat Mullins, chairman of the state party. “The Republican Party of Virginia condemns the image and its use in the strongest possible terms.”

Gov. Robert F. McDonnell (R) called the e-mail “shameful and offensive,” his spokesman Tucker Martin said. “He calls on those involved to apologize for their actions, and to immediately ensure that such imagery is never used again. The governor has long stressed the need for more civility and respect in our politics. An e-mail like this one undermines those goals, offends all Virginians and discredits our entire political process. It will not be tolerated.”

Yes, that’s the same Gov. Bob McDonnell who attended the Koch brothers’ conference in Vail last spring, and evidently didn’t have any problem with comparing President Barack Obama to executed Iraqi dictator Saddam Hussein. But that never went out in an email with the Republican Party’s logo on it, so obviously there’s no comparison.

Got that? Saddam Hussein Obama okay, born-in-Kenya Manchurian candiate Obama okay (at least according to Rick Perry), bullet-riddled zombie Obama, even on Halloween, not okay.