Next Up To Get Blowed Up: Metal Detectors!

It’s a trend started by now-Rep. Marjorie Taylor Greene of Georgia and most recently re-enacted by Republican U.S. Senate candidate Ron Hanks of Colorado: if there’s something you don’t like in this world, blow that sucker up!

Today’s example, courtesy Rep. Lauren Boebert yesterday, appears to be the metal detectors installed following the January 6th insurrection to keep everyone including congresscritters from bringing their weapons onto the U.S. House floor: 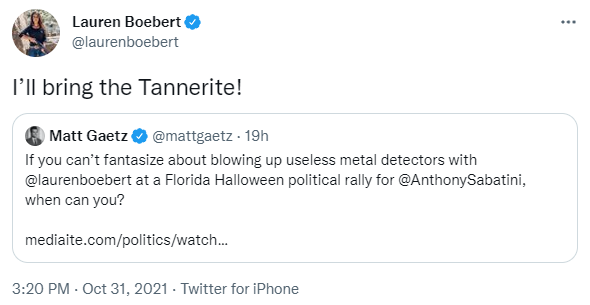 Tannerite is the target explosive of choice used in all of the aforementioned campaign spots, and it’s widely sold for the purpose of livening up a day at the gun range–and also widely misused for such purposes as gender reveal parties gone terribly wrong. It was pointed out this morning in response to Boebert’s suggestion that the FBI frowns on misuse of Tannerite beyond the small amount suitable for an exploding target: 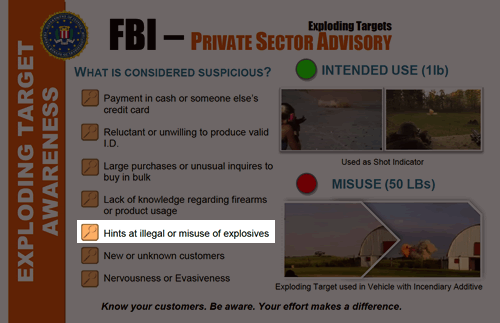 We’re going to go out on a limb here and suggest that blowing up metal detectors on the floor of the U.S. House would fall under the FBI’s criteria of “hints at illegal or misuse of explosives!” It occurs to us that Rep. Hanks might have videotaped himself blowing up an inappropriate amount of Tannerite when he sent that copy machine labeled a “DOMINION VOTING MACHINE” into the next life. In both Hanks’ and Boebert’s case, even joking about exploding government property one doesn’t like just seems ill-advised coming from elected officials.

What a relief! Our advice would definitely be, if you have to blow things up in your campaign ads, to blow them up in effigy and nowhere near the U.S. Capitol.

Or, you know, find a safer method of self-expression.