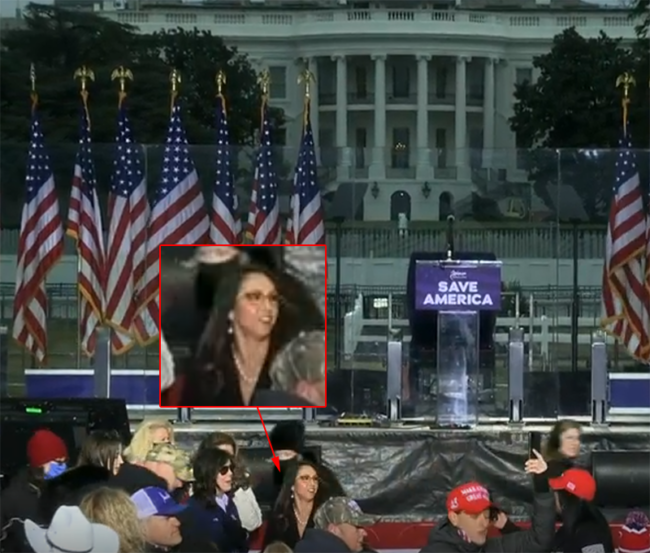 Sunday night, Rolling Stone’s Hunter Walker shook up national political news with a new report alleging many more meetings between organizers of the January 6th protest that devolved into violent insurgency at the U.S. Capitol and far-right members of Congress–including Colorado’s newly sworn-in Rep. Lauren Boebert–than have previously been disclosed:

As the House investigation into the Jan. 6 attack heats up, some of the planners of the pro-Trump rallies that took place in Washington, D.C., have begun communicating with congressional investigators and sharing new information about what happened when the former president’s supporters stormed the U.S. Capitol. Two of these people have spoken to Rolling Stone extensively in recent weeks and detailed explosive allegations that multiple members of Congress were intimately involved in planning both Trump’s efforts to overturn his election loss and the Jan. 6 events that turned violent…

These two sources also helped plan a series of demonstrations that took place in multiple states around the country in the weeks between the election and the storming of the Capitol. According to these sources, multiple people associated with the March for Trump and Stop the Steal events that took place during this period communicated with members of Congress throughout this process.

Ernest Luning of the Colorado Springs Gazette’s political blog featured Rep. Lauren Boebert’s carefully-worded response, in which she denies any role “in the planning or execution of any event that took place at the Capitol or anywhere in Washington, DC on January 6th”–but not the specific allegation made in this story that Boebert was in contact with organizers of the January 6th protest:

“Let me be clear,” said Boebert in a statement released Monday afternoon. “I had no role in the planning or execution of any event that took place at the Capitol or anywhere in Washington, DC on January 6th. With the help of my staff, I accepted an invitation to speak at one event but ultimately I did not speak at any events on January 6th. Once again, the media is acting as a messaging tool for the radical left.”

Boebert was one of several Republican lawmakers who were scheduled to speak at a rally on the Ellipse, across from the White House, on the morning of Jan. 6, but the event ran long and she didn’t speak… 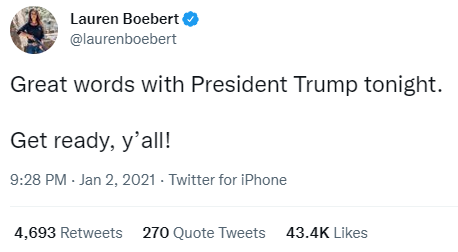 Given the constant promotion by Boebert leading up to the riot on January 6th, which the timeline shows took place while John Eastman was formulating the last-ditch plan to hand the election to Trump in the final certification process, there’s little reason to doubt she was involved in discussions with organizers of the event. Whether or not Boebert was personally involved in the logistical planning for the protest is less important because the hard work of planning really wasn’t her role. Her role was to promote the event, which she did on the morning of January 6th with her now-infamous “Today is 1776” Tweet.

Between the highly questionable lack of security at the U.S. Capitol compared to racial justice protests the summer before, the violent rhetoric employed by Republicans (including Boebert) leading up to the January 6th insurrection, and most importantly the attempt by Trump’s legal team to exploit the delay caused by the storming of the Capitol to further delay the certification of Joe Biden’s victory, there is a great deal of evidence to suggest that the violence was a deliberate part of the plan. Donald Trump himself told the nation “remember this day forever” while the rioters rampaged through the building.

As the violence inside the U.S. Capitol horrified the nation and Pence refused to carry out Eastman’s instructions for throwing out enough electoral votes to swing the election, Trump’s unprecedented bloody coup attempt failed. What would have happened had Mike Pence gone along with Eastman’s plan? What would Lauren Boebert say about the violence on January 6th had it achieved its objective? “Victory has a thousand fathers,” as the old saying goes, “but defeat is an orphan.”

Put another way: “if it prospers, none dare call it treason.”

Treason didn’t prosper on January 6th, thank goodness, and we’re free to call it what it is.