Get More Smarter on Thursday (Oct. 21)

Vote early, not often. Visit GoVoteColorado.com to check on the status of your mail ballot for 2021. Let’s Get More Smarter. If you think we missed something important, please include the link in the comments below (here’s a good example). If you are more of an audio learner, check out The Get More Smarter Podcast. And don’t forget to find us on Facebook and Twitter.

“When we are faced with a coordinated effort across our country to limit the freedom to vote, we must stand up and do what is right,” Sen. Amy Klobuchar (D-Minn.), who sponsored the bill, said on the Senate floor just before the party-line vote.

The Freedom to Vote Act would make Election Day a national holiday and set minimum standards each state must have for elections, including two weeks of early voting and an option for same-day voter registration…

…Even after moderate Democrats made concessions, no Republicans were willing to let the bill advance and for now it is stalled.

So, um, about that filibuster rule…

► As The New York Times reports, efforts by Congressional Democrats to curtail rising prescription drug costs are are getting mucked up by Republicans with help from some familiar Democratic names:

Senior Democrats insist that they have not given up the push to grant Medicare broad powers to negotiate lower drug prices as part of a once-ambitious climate change and social safety net bill that is slowly shrinking in scope. They know that the loss of the provision, promoted by President Biden on the campaign trail and in the White House, could be a particularly embarrassing defeat for the package, since it has been central to Democratic congressional campaigns for nearly three decades…

…But with at least three House Democrats opposing the toughest version of the measure, and at least one Senate Democrat, Kyrsten Sinema of Arizona, against it, government negotiating power appears almost certain to be curtailed, if not jettisoned. The loss would be akin to Republicans’ failure under Mr. Trump to repeal the Affordable Care Act, after solemn pledges for eight years to dismantle the health law “root and branch.”

► As Jesse Paul reports for The Colorado Sun, Mesa County Clerk and Recorder Tina Peters — and her attorney Scott Gessler — got a stiff-arm to the facemask from the State Supreme Court:

The Colorado Supreme Court on Wednesday declined to hear Mesa County Clerk Tina Peters’ appeal of a ruling last week barring her from having a role in the upcoming 2021 election.

Peters’ appeal argued that Mesa County District Court Judge Valerie J. Robison didn’t have the authority to remove her as the county’s designated election official and, thus, prevent her from having a role in the Nov. 2 contest…

► Douglas County Commissioners decided to opt the county out of a contract with the Tri-County Health Department in large part because they were angry about mask mandates. As The Denver Post reports, the Board of Commissioners is now SUING ITS OWN HEALTH DEPARTMENT for pushing guidelines that make mask-wearing OPTIONAL. Maybe next they can file a lawsuit against “science” in general.

For more on this bizarre story, check out Colorado Public Radio; The Colorado Sun; and Denver7. Westword takes a step back to examine how COVID-19 politics are turning the Tri-County Health Department into just plain “Health Department.”

Late last week, the Republican lawmaker from Silt had received a warning letter from the FEC that the closing balance from her 2020 year-end filing didn’t match the opening balance for her first report for 2021, which was off by $70,000.

…In an amendment to that year-end report [Pols emphasis], the fourth she’s had to file making changes to it, Boebert says her closing and opening balances were the larger figure.

Boebert also filed an amended report in her April filing [Pols emphasis], which covers the months of January, February and March. It also is the fourth time that report has been amended, according to her FEC filings. In it, she reduced her total operating expenses for those three months by $35,537, and replaced that same amount in a category named “other disbursements,” primarily for “merchant processing fees and fundraising” to WinRed, an online fundraising platform for conservative candidates.

Boebert also filed an amendment to her “statement of organization” filing [Pols emphasis], required to note what other committees she is operating or cooperating with in fundraising efforts.

Maybe Boebert thinks Members of Congress are always supposed to be filing amendments — no matter the purpose.

► The COVID-19 outbreak in Russia has gotten so bad that Moscow is implementing full lockdowns. As The Washington Post reports:

With Russia enduring its worst wave of the coronavirus pandemic, setting grim records in daily cases and deaths, Moscow announced a lockdown Thursday — a move the Kremlin had previously said it would avoid at all costs.

Russia joins other countries grappling with how to reintroduce restrictions after doing away with nearly all of them. Public health experts in Britain, for example, are calling on the government to bring back some restrictions as cases climb despite the country’s high vaccination rate.

Russia — Moscow, in particular — has in the past year regularly introduced measures when new cases have spiked, including a digital pass system for the vaccinated and a curfew for bars and restaurants. But those provisions were often quickly abandoned, in some cases after just a couple of weeks. Mask-wearing compliance throughout the country remains low.

► Charlotte Sweeney appears likely to win confirmation to the 10th Circuit Court, which is located in Colorado. If approved, Sweeney would become the first openly gay woman to serve on the federal bench in Colorado.

► As POLITICO reports, everyone is worried about everything as the race for Governor in Virginia nears the finish line:

A creeping sense of worry among Democrats about the Virginia governor’s race spilled into the open on Wednesday, after the release of a new Monmouth University poll showing former Democratic Gov. Terry McAuliffe deadlocked with Republican Glenn Youngkin less than two weeks before Election Day.

And the panic may be a good thing, some of them say.The Monmouth poll was the latest in a series of data points to increase concern about McAuliffe’s prospects. While other recent polls in Virginia have shown McAuliffe staked to narrow leads, President Joe Biden’s national ratings have slid into majority disapproval of his tenure, with his agenda still stalled in Congress. Democrats’ internal polling elsewhere is similarly bleak, as they look to keep their slim majorities in Washington. And turnout among early and mail voters, which Democrats often look to as a barometer of enthusiasm, paints an uncertain picture two weeks out.

Despite — or because of — the warning signs, Democrats hope the news will wake up slumbering supporters the way it did in California last month, when Democratic Gov. Gavin Newsom appeared to be slipping into dangerous territory in polls before generating high turnout to beat back a recall attempt with ease.

► The Colorado Sun has more on the repercussions for several incumbents as new legislative redistricting maps are being finalized.

► As Madeleine Schmidt reports for The Colorado Times Recorder, Republican gubernatorial candidate Heidi Ganahl still can’t figure out a good way to answer the most important candidate question of 2022.

► Republican Senate candidate Eli Bremer announced that he has been endorsed by former State Republican Party Chair Jeff Hays…who was in charge of the GOP when Republicans were absolutely DECIMATED at the polls in 2018. We’re guessing there wasn’t a real heated battle to secure the Hays endorsement.

► Colorado announced a first-of-its-kind partnership wherein an area near Sweetwater Lake in Garfield County will be jointly managed by state and federal forest service officials.

► CDOT and RTD are engaged in an expensive pissing match.

► A disinformation campaign out of China is pushing a COVID-19 origin theory that the pandemic is the fault of Maine lobsters.

► Arizona Democratic Sen. Kyrsten Sinema may not be doing much to help Democrats, but she’s kicking ass for rich people! Several advisers to Sinema are not impressed and are walking away from her office.

#HeyNext Commentary: @HeidiGanahl is not an anti-vaxxer. But Ganahl gave a platform to an anti-vaxxer who told her supporters to go contract COVID-19 at a time when the @ColoGOP needs every alive Republican voter it can get. #copolitics pic.twitter.com/Jz6DYVfPri

► What in the holy hell is going on in Western Colorado? 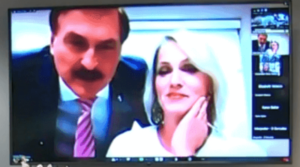