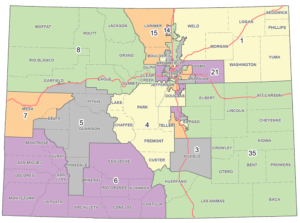 Last week, Colorado’s Independent Legislative Redistricting Commission adopted new maps for the General Assembly’s 65 House and 35 Senate seats. Despite some last-minute attempts to subvert the process on the part of a few Republican commissioners and a group of usual-suspect Republican lobbyists currently the subject of an investigation by the Secretary of State for illegally attempting to influence the process, by most initial analysis the new maps (pending their necessary approval before the Supreme Court) will position the Democrats to maintain their majorities in the House and Senate.

As the Vail Daily’s Scott Miller reported last week, one Democrat set to take advantage of the new map is Rep. Dylan Roberts of Eagle County, drawn into a revamped SD-8 that draws Roberts’ home in Eagle County and east along the I-70 corridor east as far as Gilpin County with the whole northwest corner of the state:

Dylan Roberts, an Avon Democrat, is the current representative for House District 26. He plans to run in 2022 for the Senate District 8 seat…

The new Senate district will be even more diverse, with economies in the district depending on mountain resorts, gambling, agriculture and mining.

Whoever the new Senator is for that district will have to both work with other Western Slope legislators in an Eastern Slope-dominated legislature, and recognize and work for issues that all 10 district counties have in common, Roberts said. That includes workforce housing, transportation and water. 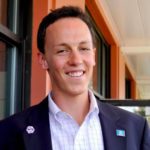 With Rep. Roberts moving into position to claim the competitive but Democratic-leaning new SD-8, Republican incumbent Sen. Bob Rankin is set to inherit outgoing Sen. Kerry Donovan’s SD-5 seat through the end of his term in 2024–when this closely competitive seat becomes a major pickup opportunity for Democrats. It’ll take time for the effects of these map changes to sink in, and of course we won’t really have a hard data point until after they’re used in an actual election. But this undeniably provides more long-term opportunity for Democrats than Rep. Roberts simply succeeding outgoing Sen. Kerry Donovan in today’s SD-5.

A few such opportunities, and good candidates ready to take advantage of them, is how bigger majorities are grown. Any other outcome would not be consistent with the solidifying Democratic majority of the electorate in Colorado clearly demonstrated in this state in recent election cycles. There simply aren’t enough Republicans to go around without some serious gerrymandering–and although Democrats might have preferred more control over the process in line with the majority control they presently hold in Colorado, in the end, these are maps upon which Democrats can continue to fight and win.