Get More Smarter on Thursday (Oct. 14) 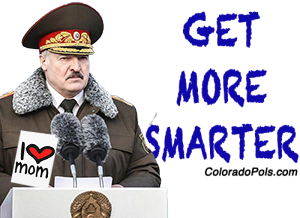 Happy Belarussian Mother’s Day! Let’s Get More Smarter. If you think we missed something important, please include the link in the comments below (here’s a good example). If you are more of an audio learner, check out The Get More Smarter Podcast. And don’t forget to find us on Facebook and Twitter.

► Former President Trump on Wednesday made a very strange threat about Republican voters walking away if the 2020 election isn’t overturned:

Greg Sargent of The Washington Post has a fascinating column that is worth reading that has some new insight into the Trumpism phenomenon:

Republicans recognize that continuing to pander to those lies may be absolutely essential to keeping Republican voters engaged without Trump on the ballot doing it instead.

Trump’s statement has been analyzed as either the latest projectile vomiting to issue from his disordered mind or as a genuine political problem for Republicans. But few have paused to ask whether it might actually be true that energy among GOP voters turns on keeping alive the idea that the 2020 outcome was dubious or illegitimate, and what that might mean.

Sargent also links to this CNN story about how many House Republicans seem to be openly embracing the possibility of a Trump presidential campaign in 2024.

► 9News reports on a lawsuit filed by a former Dominion Voting Services employee related to “The Big Lie” that may have originated here in Colorado:

Coomer went into hiding after Oltmann claimed, without proof, that he heard a conference call where Dominion was plotting with Antifa to give the election to President Biden.

That call was not recorded and no one besides Oltmann has said they heard the call.

► What’s this? Oh, just Republican State Rep. Richard Holtorf literally THREATENING the board of directors of the Prowers Medical Center for trying to abide by COVID-19 vaccination requirements.

► As The Denver Post reports, Colorado has not seen a big surge in evictions following the end of federal protections.

Eviction filings in Colorado last month came in at two-thirds of the level seen in September 2019, despite the end of a federal eviction moratorium in August that allowed landlords greater leeway to take action against tenants behind on the rent, according to the Colorado Apartment Association.

The state recorded 2,498 eviction filings in September, which was 66.3% of the number filed in September 2019. It marked the first full month since the U.S. Supreme Court ruled an eviction moratorium by the Centers for Disease Control unconstitutional.

Much of the debate focused on a specific section of the voter-approved amendments that established the independent redistricting process. Section 44.3 of Amendment Y prohibits “diluting the impact of … (a) racial or language minority group’s electoral influence.” This provides more protection in the state constitution than the federal Voting Rights Act of 1965, the legal challengers argue.

Civil rights groups said, however, that the congressional redistricting commission did not consider that provision closely enough and needed a better analysis of minority voting patterns to avoid that type of dilution, specifically for the state’s Latino voters.

Even when it is impossible to draw a so-called “minority-majority” district, the groups argued that the commission still needed to prioritize a consideration of how minority groups could influence election outcomes.

► Republican gubernatorial candidate Heidi Ganahl is, as they say in pediatric medicine, failing to thrive.

► A judge has stripped Mesa County Clerk Tina Peters of her election oversight responsibilities as the criminal investigation into “MesaGate” continues.

► Gov. Jared Polis has the solution for living in the same house as anti-vaxxers: just get the shot and don’t tell them.

► After all the consternation, less than 1% of Denver cops and first responders quit over the vaccine mandate.

► El Paso County Republicans continue to bicker over whether to include “Big Lie” questions in a school board candidate questionnaire.

THOUSANDS of AMERICANS had jobs working on a pipeline that didn’t exist yet? Um, no, Ken. That’s not true.

► How does this help? CNN’s Dr. Sanjay Gupta appeared on COVIDiot extraordinaire Joe Rogan’s podcast and was knuckled into agree that ivermectin is not just “horse dewormer.” It also doesn’t cure COVID, but that part got lost in the din.

► Speaking of not helping one’s self, Rep. Lauren “Q*Bert” Boebert continues to help make the hashtag #LaurenBoebertIsSoDumb trend on Twitter.

► The Denver Post editorial board recommends a no vote on Proposition 119 increasing marijuana taxes.