Be Disgusted By “Replacement Theory,” But Don’t Be Surprised 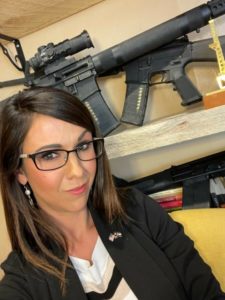 Oliver Willis at the American Independent reports on a video posted yesterday by freshman GOP Rep. Lauren Boebert, in which Boebert clumsily (this being Boebert’s only speed without a script) embraces a well-known racist trope known as the “Great Replacement Theory”–the theory that white people are being deliberately replaced by nonwhite immigrants in the United States and other Western countries who are according to the theory more obedient to authority:

Republican members of Congress are doubling down on their support for the racist conspiracy theory that nonwhite immigrants are being brought into the United States systematically to take the place of white people, a claim often referred to as “the great replacement theory.”

In a video posted to her Facebook page on Monday, Rep. Lauren Boebert (R-CO) promoted the theory during a hearing of the House Budget Committee as it debated the 2022 budget bill.

Here are Boebert’s verbatim words from the video above:

BOEBERT: To top it off, they want to grant amnesty and a path to citizenship to eight million illegal aliens. Yes, there is definitely a replacement theory that’s going on right now. [Pols emphasis] We are killing American jobs and bringing in illegal aliens from all over the world to replace them if Americans will not comply with the tyrannical orders that are coming down from the White House.

We like you reflexively jerked to correct Boebert’s bumbled delivery, since if the “theory” is “going on right now” it’s no longer a theory, there we said it–but to stay on topic, the “Great Replacement Theory” is one of the principal ideological drivers of the modern-day global white nationalist movement. It’s been cited as justification by racially motivated mass shooters from El Paso to Christchurch, New Zealand, and “you will not replace us” was the rallying cry at the infamous “tiki torch march” during the Unite The Right white supremacist rally in Charlottesville, Virginia in 2017 that ended in deadly violence.

Even before the era of Donald Trump turned racial animus into the overt campaign tool it is today, Coloradans have had our brushes with proponents of this racist theory as it gained adherents over the past decade. The Western Conservative Summit brought far-right Dutch politician Geert Wilders to their annual conference way back in 2012 with his controversial message of not putting up with “multiculturalism,” “stop[ping] immigration from Islamic countries,” and banning the construction of new mosques.

Local Republicans lapped the hate up.

As for Lauren Boebert, her blundering delivery is a clue that she’s once again playing catch-up to bigger-name Republican luminaries including Tucker Carlson and Matt Gaetz, who in the last few days have test-marketed the legitimization of what was not so long  an instantly self-discrediting conspiracy theory. The Anti-Defamation League responded with a call for Carlson to resign.

In Colorado, powerful Republicans like Larry Mizel, who founded the Simon Wiesenthal Center and the Museum of Tolerance in Jerusalem, faced criticism during the Trump years for their support of politicians who frequently made a mockery of their professed values. As the “MAGA” wing of the Republican Party continues its descent into unapologetic racism, everyone who aided and abetted their rise to prominence needs to answer for what is happening now.

If there is no one willing to say otherwise, Lauren Boebert is the Republican Party.