“If Prop 103 Passes…” Ben “Nighthorse” Campbell Will Eat Your Brains

Here at Colorado Pols, we always do our best to keep our loyal readers informed about important political and public policy issues. Proposition 103 is an education-funding ballot measure that Colorado voters will decide upon this fall. It would restore the sales and income tax rates that were in effect in 1999 in Colorado, raising income tax rates from 4.63% to 5%, and sales taxes from 2.9% to 3%. But that’s not all. 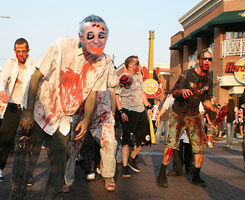 If Prop 103 passes, it will usher in a zombie apocalypse that will begin with the reanimation of the corpse of former Democratic Republican Sen. Ben “Nighthorse” Campbell. On November 9, 2011, Campbell will rise from the dead in a fit of miniscule tax-increment adjustment rage to feast on the brains of Colorado voters. His slow, methodical march through the towns of Colorado will turn other voters into brain-sucking zombies as well, and by the end of the 2012 school year, there will be no human children left in Colorado to take advantage of smaller class sizes or textbooks that were actually published in this century. The zombie march will continue throughout the Western United States (except in Wyoming, because there aren’t enough people in Wyoming to sustain a hungry zombie horde), ending life as we know it…and all because Prop 103 was passed.

What’s that you say? Ben “Nighthorse” Campbell is still alive? Hmmm…well, what about that “Dayhorse” guy? Is he still alive?