Get More Smarter on Tuesday (September 21)

There are 101 days left until 2022. Let’s Get More Smarter. If you think we missed something important, please include the link in the comments below (here’s a good example). If you are more of an audio learner, check out The Get More Smarter Podcast. And don’t forget to find us on Facebook and Twitter.

► Senate Minority Leader Mitch McConnell says that Republicans will vote for the United States to default on its debt obligations. As The New York Times reports:

The House is expected on Tuesday to pass legislation that would keep the government funded through early December, lift the limit on federal borrowing through the end of 2022 and provide about $35 billion in emergency money for Afghan refugees and natural disaster recovery, setting up a clash with Republicans who have warned they will oppose the measure.

The bill, which Democrats released on Tuesday just hours before a planned vote, is needed to avert a government shutdown when funding lapses next week and avoid a first-ever debt default when the Treasury Department reaches the limit of its borrowing authority within weeks. But it has become ensnared in partisan politics, with Republicans refusing to allow a debt ceiling increase at a time when Democrats control Congress and the White House.

In pairing the debt limit raise with the spending package, Democrats hoped to pressure Republicans into dropping their opposition. But few, if any, Republicans are expected to support it.

And the prospects for passage in the 50-50 Senate appeared dim amid widespread opposition by Republicans, who have said they will neither vote for the legislation nor allow it to advance in the chamber, where 60 votes are needed to move forward.

This is the part in our story where you might say, But Democrats voted to prevent a government shutdown when Donald Trump was President. If you’re saying that, then we would remind you that Mitch McConnell DGAF.

► President Biden took the stage in front of the U.N. General Assembly today for the first time as President. As NBC News reports:

Biden used his biggest moment so far on the international stage at the United Nations General Assembly on Tuesday to call on global leaders to take stronger action on Covid-19 and climate change, as he sought to re-establish America’s alliances and role in the international community.

Looking to signal a break from his predecessor’s isolationism, “America first” policies, he repeatedly pledged to work with other nations and to establish the United States as a leader in tackling the challenges facing the planet.

“We will lead, we will lead on all the greatest challenges of our time from Covid to climate, peace and security, human dignity and human rights, but we will not go it alone,” Biden said. “We will lead together with our allies and partners and in cooperation with all those who believe, as we do, that it is within our power to meet these challenges, to build a future that lifts all of our people to preserve this planet.”

The speech, his first as president at the meeting, was at a gathering very different than those in the past, with many world leaders opting to deliver their remarks virtually.

► With a deadline to finish drawing new district boundaries just around the corner, The Colorado Sun looks at where things stand with Colorado’s independent redistricting commissions.

Meanwhile, it appears that Republican redistricting lobbyists are throwing caution (and the rules) to the wind in a last-ditch effort to influence the drawing of districts in GOP favor.

► A new book on the end of the Donald Trump administration lays out some damning information about the degree to which former CU visiting professor John Eastman plotted to literally overthrow American democracy in order to keep Trump in the White House. This is likely to become a significant issue for CU Regent Heidi Ganahl as she campaigns for the Republican gubernatorial nomination.

Colorado Republicans don’t have any potential candidates for three of the four major statewide races that will be on the ballot in 2022. History suggests that they should already have several campaigns in operation by now.

► As Dana Milbank writes for The Washington Post, election denial is the new religion for Republicans:

Trump has alleged fraud against Democrats in 2016, 2018, 2020 and now 2021, but he once did the same to a Republican. In all cases except for Cruz (who did attempt to mislead voters), the charges were grounded in nothing but self-interest. . For Trump, it’s binary: Heads I win, tails you cheated — except in 2016, when he alleged massive fraud even in victory.

Yet this flimsy fallacy has consumed the Republican electorate. A CNN poll released a week ago found that fully 59 percent of Republicans agreed that “believing that Donald Trump won the 2020 election” is either somewhat or very important to “what being a Republican means to you.” It may be sickening that a democracy-killing lie has become core to Republican identity, but it shouldn’t be surprising. Republican officeholders routinely echo Trump’s fraud fictions — and Trump never stops, as last week illustrated…

► Canadian Prime Minister Justin Trudeau had a mixed night as Canadian parliamentary elections gave his Liberal Party the most seats of any party but not enough to form a majority.

► Colorado is now expecting anywhere from 1,000 to 2,000 Afghan refugees to resettle in our state.

► Veronica Rossman, a former federal public defender, has been confirmed to fill a vacancy on the 10th Circuit Court of Appeals.

► Jennifer Rubin of The Washington Post writes about the “anti-vaccine cult” that is preventing the United States from stopping the COVID-19 pandemic. The COVID-19 death toll in the U.S. has now surpassed the total number of deaths from the 1918 flu pandemic.

On a more positive note, Pfizer announced that data seems to indicate a COVID-19 vaccination is safe for children age 5-11. Experts hope that a vaccine could be made available for children by Halloween. Colorado Gov. Jared Polis is calling on the FDA to speed up its process for approving the vaccine.

► A new poll from 9News/Colorado Politics shows that a majority of Coloradans APPROVE of vaccine and mask requirements for combatting COVID-19.

As 9News explains, people are getting pretty upset with the unvaccinated: 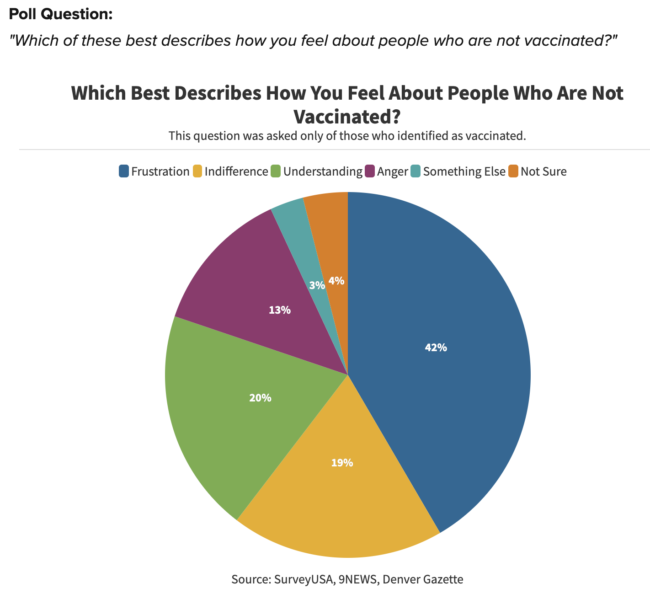 As The Denver Post reports, the chances that you’ll come into contact with someone who is infected with COVID-19 have never been higher.

► Colorado is getting $275 million in federal funding to help make child care more affordable and accessible.

► As Charles Ashby reports for The Grand Junction Daily Sentinel, Mesa County Commissioners are trying to explain to embattled Clerk and Recorder Tina Peters that she can’t just invent her own laws:

One can’t simply write on a document saying it isn’t subject to government open records laws, give it to an elected official and then claim that document isn’t open to the public. Doing so is antithetical to a democracy, county officials and open government experts said Monday.

But that’s exactly what Mesa County Clerk Tina Peters and her supporters did when they claimed that an anonymous report that falls far short of showing that the 2020 general election was somehow compromised that Peters gave to commissioners Friday was not subject to the state’s open records laws.

In the title to a cover letter to that report from Peters to Mesa County Commissioners Janet Rowland, Scott McInnis and Cody Davis, the embattled clerk who is facing possible criminal charges and a lawsuit to remove her as the county’s election chief wrote: “Confidential Legal Documents Exempt from Colorado Open Records Act.”

In an email to commissioners two days later and after the report was mentioned in an article in The Daily Sentinel, Peters admonished the commissioners for turning it over to the newspaper.

► The new Texas abortion law is about as stupid in practice as it was on paper.

► POLITICO profiles weirdo Republican donor Peter Thiel and tries to figure out what he is trying to accomplish with all of his donations.

► More than 1,000 Denver Public Schools students walked out of class on Monday to demand the resignation of Denver school board member Tay Anderson. As The Denver Post reports:

More than 1,000 students walked out of Denver Public Schools classrooms across the city Monday to call for the resignation of school board member Tay Anderson, who was censured by his colleagues last week for “behavior unbecoming of a board member.”

Friday’s vote by the DPS board to publicly reprimand Anderson followed the release of a third-party investigation into allegations of sexual assault against the 23-year-old elected official.

The months-long investigation did not substantiate any of those claims, but did conclude Anderson had flirted online with a 16-year-old student this summer before knowing her age, and made coercive and intimidating social media posts during the investigation.

For his part, Anderson is refusing to resign.

Hot take from the man who is probably the dimmest bulb in Congress:

► Former President Trump wrote a letter to the Georgia SOS last week demanding (again) that the 2020 election results are overturned. Rolling Stone has more on this very sad letter from a very sad man.

► The creator of the popular animated show Family Guy has had enough of the anti-vaxxer bullshit from Fox News:

► The headquarters of the Bureau of Land Management is moving back to Washington D.C., where it belongs. Thus ends another stupid effort from former Sen. Cory Gardner.

► Dave Perry of The Aurora Sentinel reacts just like everyone else to the Heidi Ganahl for Governor kickoff:

She burned her own nascent campaign for Colorado governor to the ground on Day 1 Tuesday by admitting that she regularly erases old social media posts as a “business” practice and refused to tell 9News Political Reporter Marshall Zelinger if she still believes in Donald Trump’s Big Lie about the 2020 presidential election being rigged or rife with fraud.

She brushed away Zelinger’s congenial but determined queries, saying that Colorado voters don’t care about such trivialities. She ignored the astonishing coincidence — that her odd “business” habit of deleting old tweets, as a public official who’s Twitter account was aflame with fiery political opinions — occurred the same time she made official she was running for governor. She insisted to Zelinger that what voters only care about is the “rampant” rate of murders and teen suicides that she says Gov. Jared Polis is responsible for.

The performance was so off key it was painful to watch.