Death Threats Against Jena Griswold: You Already Know Why 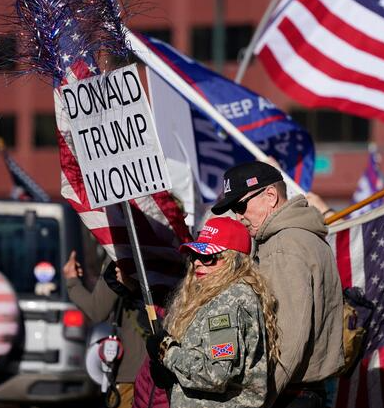 Fact-deprived conspiracy theorists and the armed activists who love them continue to insist without evidence that the 2020 elections were stolen from Donald Trump, the fervent belief in which pushing a small but troublingly well-armed and vociferous segment of the population toward what they tell us could be another civil war. The failed insurrection at the U.S. Capitol on January 6th resulted in a temporary realignment of some Republicans away from Trump and the subversive conspiracy theories underpinning continued resistance to Trump’s defeat, but that proved to be only temporary–GOP congressional leadership soon came crawling back as it became clear that the Republican rank and file were unshakably loyal to Trump.

Today, across the country “dead-ender” supporters of Trump are still agitating without evidence that the election was stolen, though attempts to prove that to anyone outside their own self-reinforcing circle of misinformation have fallen apart. But as Denver7’s Sloan Dickey reports, for those already convinced that what they want to believe is true, there’s no need to wait any longer to start making death threats:

The Colorado Secretary of State’s Office shared some of those threats with Denver7. The comments were posted to [SoS Jena] Griswold’s personal and public social media accounts and sent in direct messages. The messages make direct and gruesome threats against her life.

“I KNOW WHERE YOU SLEEP, I SEE YOU SLEEPING. BE AFRAID, BE VERY AFRAID. I hope you die,” one message said.

“Everyone knows… there are people looking for you,” another said.

Thousands more posts and threats, many with unrepeatable vulgarity, have filled her online accounts over the past year. She says the threats come as she works to increase access to voting and election security in Colorado.

In Mesa County, where Republican elected officials have been threatened with civil war over public health measures to combat the COVID-19 pandemic and more recently pilloried for purchasing new election equipment from the same Dominion Voting Systems at the center of the most prevalent conspiracy theories about 2020, the rhetoric hasn’t gotten as personal. Given the vitriol fellow Republicans in Mesa County have contended with for months from their own putative base, it’s not hard to understand how Colorado’s Democratic Secretary of State would be targeted with much, much worse.

While in the end you can’t call these grotesque threats against Secretary of State Griswold a surprise, it’s our sincere hope that they’re dealt with as rigorously as the law allows. With the scandal over Mesa County Clerk Tina Peters’ allegedly criminal actions trying and failing to prove the “Big Lie” dominating the headlines, we feel there’s a need for the public to understand what’s happening to Secretary of State Griswold as a byproduct of the same pressure.

There’s no excuse for any of it, and Republicans have the primary obligation to stand up against it.