D’oh! Buck Deletes His Own Gibberish Tweet on Spending

The non-official Twitter account for Congressman Ken Buck (R-Greeley) Tweeted out a spectacular bit of nonsense this afternoon before somebody apparently came to their senses and hit the ‘DELETE’ button. But, alas, nothing ever REALLY gets erased from the Internet, so we can show you exactly what Team Buck hoped to delete: 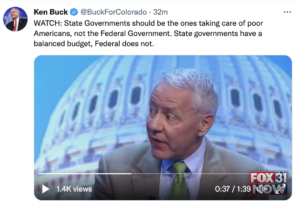 The screenshot above is taken from this video, which shows a Colorado State Chamber of Commerce event from last week that featured Buck and fellow Colorado Reps. Joe Neguse (D-Boulderish), Doug Lamborn (R-Colorado Springs), Jason Crow (D-Aurora), and Ed Perlmutter (D-Jefferson County). In the clip that was Tweeted (and deleted), Buck is yammering some nonsense about why the State Government should pay for things instead of the Federal Government (jump ahead to the 40:25 mark HERE).

Buck seems to be upset that the Colorado legislature would use COVID-19 relief funds — as requested by many Colorado business leaders — to help backfill the coffers that support unemployment benefits. But his point is rather in-artfully articulated:

BUCK: Nobody, nobody in either party wants to deny someone daycare services. For those that can’t afford daycare services, there absolutely should be daycare services. And there should absolutely be services available for those who can’t afford that. And there absolutely should be services available for those who can afford that and want to pay for it. The question really is, which level of government writes the check? And we’re faced with the issue now — if there are daycare services that are necessary, state government should write that check. State government has to balance its budget. The federal government doesn’t balance its budget. So to take federal money in an unbalanced way, in a deficit-spending way, to pay for those expenses is wrong. [Pols emphasis] Again, the governors are the group that decided how to shut down their economy, how to manage the situation on the ground in each individual state.

And by the way, when my friend Ed [gestures toward Perlmutter] says that Colorado had less deaths than Florida, Florida has always been a magnet for seniors. [This is seemingly meant to be a joke] Seniors are the most vulnerable, they went to Florida, and Colorado is one of the youngest, healthiest states in the country, and so to compare those two is kind of apples and oranges. But when you’re talking about this unemployment benefit, I think it’s really important to understand that Colorado has to step up in some way and accept some of the responsibility for that. I haven’t seen the bill yet — I’m not going to pass a judgment on the bill at this point — but in my mind, I think we have to make sure that we are putting the burden on the right level of government.

You can see what that’s probably not the best bit of public speaking for Team Buck to promote. We’d encourage you to watch the video yourself, if nothing else to catch the priceless reaction from Rep. Perlmutter as Buck rambles along.

Buck spent the early part of his career as a prosecutor with the U.S. Department of Justice before serving two terms as the Weld County District Attorney. He was elected to Congress in 2014.

In a separate segment, Buck also decried the existence of extended unemployment benefits, repeating the oft-used GOP talking point that extended UI benefits are preventing the American workforce from fully recovering after the pandemic. Actual research, in fact, has shown that THERE IS NO EVIDENCE to support the idea that extended UI benefits were encouraging some Americans not to seek employment.

It’s well-known that Ken Buck will take every position on every subject at some point. Occasionally he even tries to make a logical argument, but most of the time — as in the segment above — Buck just spouts out words in an order that might make sense in his head but dies a quick death when exposed to outside air.