At Least He’s Not Your Pistol-Packing Representative (This Time) 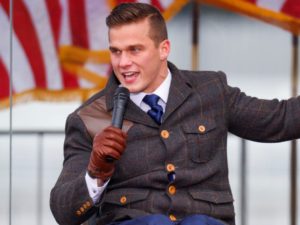 U.S. House member Madison Cawthorn had his gun taken by airport police and will likely face a federal fine and loss of a special security status, local and federal officials said.

The Republican congressman representing Western North Carolina’s 11th District was attempting to board a plane Feb. 13 when Transportation Security Administration workers found an unloaded gun in his carry-on bag, along with a loaded magazine, according to Asheville Regional Airport officials.

The weapon was described in a redacted incident report and police radio traffic recordings as a “Glock 9mm handgun.”

Cawthorn, whose spokesman responded to questions July 30 saying he brought the gun by mistake, was not charged with any crime, according to reports and other information on the incident obtained this month through a public records request. That is a normal outcome, said spokeswoman Tina Kinsey.

Freshman GOP Rep. Madison Cawthorn of North Carolina, doing his best to keep up with the cavalcade of crazy from his fellow freshman Reps. Marjorie Taylor Greene and Lauren Boebert, really loves his guns and makes a big deal about carrying one everywhere–including possibly into the U.S. House on January 6th. Of course, safe and legal gun ownership starts (we assume) with knowing where your gun is at all times, and to just plain forget that you’ve brought one into an airport security line is a lapse that should result in more punishment than it typically does.

“Typically,” you ask? Well, yes readers, if you haven’t followed Colorado politics for as long as we have you might not know that Colorado Republicans have made irresponsibility with their guns a recurring theme. In December of 2017, then-state Rep. Lori Saine was busted at a DIA security checkpoint with a loaded pistol in her bag. And in 2014, former Rep. Jared Wright left a loaded handgun unattended in a House committee hearing room. Both incidents raised questions about the policy at the Colorado Capitol allowing lawmakers to carry concealed weapons in a building where everyone else has to trust the Colorado State Patrol.

The next year Rep. Saine went right back to sponsoring legislation to weaken Colorado’s gun laws like nothing happened, so don’t expect Rep. Cawthorn to suddenly become contrite over gun safety. For the rest of us, though, it’s another chance to learn an important lesson before somebody gets hurt.

Call it leadership by cautionary tale.