Police Reform is Working in Colorado 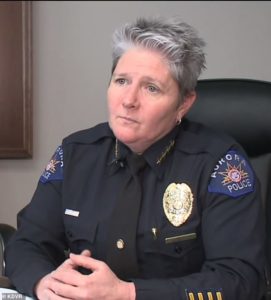 In June 2020, Democrats in the state legislature pushed through new police reform measures aimed at increasing transparency and accountability for law enforcement. That legislation was prompted, in part, by the killing of George Floyd in Minneapolis and Elijah McClain in Aurora, Colorado. The bill in the legislature was followed by policy changes in some municipalities, including Aurora.

This week, a graphic new case of police brutality in Aurora is putting those reforms to the test…and so far, they seem to be working.

The arrest of two Aurora police officers is the latest in a string of Colorado officer arrests since the killing of George Floyd. Floyd’s death and the historic protests that followed inspired a law requiring Colorado police officers to intervene and report excessive uses of force…

…Body-camera video from the incident has already been made public. It’s an action Rep. Leslie Herod, D-Denver, is praising.

“The body camera footage was released right away,” Herod said. “That shows that our law is working, and it is quite frankly doing more than I thought it would be doing, which is changing the culture in some of these departments.”

Westword has more on Tuesday’s release of body-camera footage from last week’s arrest of Kyle Vinson:

On July 27, during a highly unusual press conference, Aurora Police Chief Vanessa Wilson screened excerpts from body-camera footage to show why two of her officers, John Haubert and Francine Martinez, had been arrested for the incredibly brutal July 23 arrest of Kyle Vinson.

In the video, Vinson is choked, pistol-whipped and more by Haubert, gasping out repeated cries of “Help!,” “Don’t shoot me!” and “I can’t breathe!”

CLICK HERE to see the body-camera footage [CAUTION: The footage is graphic and difficult to watch]. Vinson repeatedly says in the video that he does not have a warrant out for his arrest; that turned out not to be true, but it is undeniable that Vinson made absolutely no effort to evade Aurora police officers. Officers Haubert and Martinez have both been arrested and charged with multiple crimes.

As Westword notes, it used to be routine practice in Aurora to NOT release body-camera footage; the very act of the Aurora PD holding a press conference to screen such footage was itself unusual. New police reform policies, and the direction of Aurora Police Chief Vanessa Williams, who was hired last August, appear to have moved things in a better direction.

We certainly wouldn’t argue that Colorado has solved the issue of police brutality, but it’s worthwhile to note that reforms seem to be working thus far. Recognizing progress is an important step in addressing any problem.