Nobody Wants to be Near MTG in El Paso County 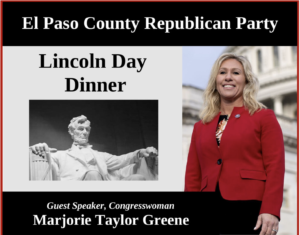 Lots of Republicans are going to be out of town on this day…whatever day it is.

We noted last week that the El Paso County Republican Party has not exactly gotten an enthusiastic response about its decision to bring in Georgia Republican Rep. Marjorie Taylor Greene (MTG) as the keynote speaker for its annual fundraising event next month. Colorado Republicans are distancing themselves from the El Paso County “Lincoln Day Dinner” like it was a COVID-19 vaccination drive, with State Party Chairperson Kristi Burton Brown (KBB) the latest to have found something else to do on August 6.

Brown was the featured subject in a recent saccharine interview on KOAA News in Colorado Springs, in which third-person point of view enthusiast Rob Quirk uncovered this unintentionally-hilarious “oops” moment:

News 5 Anchor Rob Quirk asked Burton-Brown if she supports the Taylor-Greene announcement, she did not give him a yes or no answer, saying she is focused on what serves Colorado best, so News 5 asked does this move serve the party best, to invite her?

“I think one thing we have to make sure we do is get away from making politics so much the world of personalities, and take it back to the world of ideas,” said Burton-Brown.

Burton-Brown told News 5 she would not be attending the fundraiser in August, saying her schedule is full, and she has other commitments that day. [Pols emphasis]

Remember that we’re talking about the actual Chairperson of the Colorado Republican Party, who hails from Colorado Springs, admitting that she has no intention of attending the big annual fundraising dinner in the most heavily-populated Republican county in Colorado. This isn’t like KBB being unable to work into her schedule a meeting of the La Plata County Republicans. The El Paso County GOP dinner is one of those events that the State GOP Chair normally makes time to attend, but in this case, KBB doesn’t want to be anywhere near MTG.

Greene has said on at least one occasion that she is really excited to speak to the El Paso County Republicans. Literally dozens of Colorado Republicans appear to share that enthusiasm.