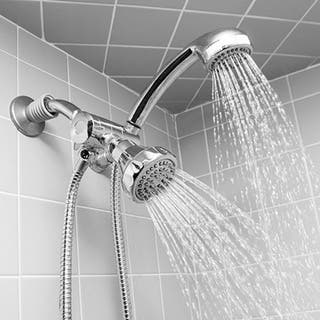 2.5 gallons per minute total, not each.

The Hill reports on the latest rollback by the President Joe Biden’s administration of bad policy instituted by his predecessor Donald Trump–this time a water conservation rule that irked Trump to an unusual degree:

The Biden administration is moving forward with a plan to drop a Trump-era rule that sought to loosen restrictions on showerhead water flow — something the former president was known to complain about.

The Energy Department announced on Friday that it is taking a step toward reversing the Trump administration’s move in order to tighten showerhead efficiency regulations.

Officials said they will propose a rule reinstating the 2013 definition of “showerhead,” which the Trump administration changed. The Trump rule from late last year sought to bypass a requirement allowing no more than 2.5 gallons to flow through a showerhead per minute.

The short version is that rather than allowing for a total flow of 2.5 gallons per minute in your shower, Trump changed the rule to allow each individual showerhead to have that amount of flow–meaning the dual and multi-head showers that everyone builds these days could use many times the original limit, defeating and even reversing the goal of conserving water.

Here in the West, where water unlike at Mar-a-Lago is a precious and dwindling resource, Trump’s obsession with wasting water to rinse the gel out of his combover never went over very well even though he regularly invoked the issue in stump speeches. It was a strange, vain pursuit–words that describe Trump himself very well.

Anyway, we’re going to save some water in the shower again. Tyranny it’s not.