Time To Admit Moving BLM To Grand Junction Was Wrong? 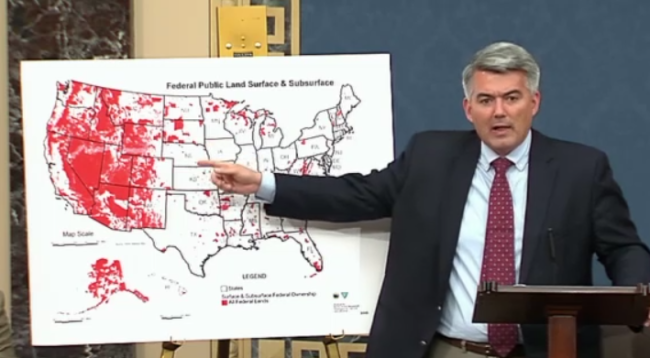 Ex-Sen. Cory Gardner passionately arguing for the relocation of BLM HQ to Grand Junction in 2019.

Colorado Newsline’s Chase Woodruff follows up on a messy story we’ve been watching in the aftermath of the Trump administration’s four years of plundering management of the federal government–the controversial relocation of the Bureau of Land Management headquarters from Washington, D.C. to Grand Junction, Colorado, sharing an office building with Chevron and other fossil fuel businesses.

That is to say the BLM would be sharing office space with Chevron, if the relocation to Grand Junction had actually happened. After all these years and consternation, the professionals who make up the Bureau have voted resoundingly with their feet:

Ex-BLM employees and public-lands advocates paint a dire picture of what happened to the agency following the relocation, which was announced by Gardner and Interior Secretary David Bernhardt, a Colorado native and longtime oil lobbyist, in July 2019. It’s a picture that was backed up by figures released by the Interior Department following President Joe Biden’s inauguration in January; out of hundreds of positions affected by the move, Interior officials said, 287 employees chose to resign or retire from the agency, while 41 accepted relocation. The latter number, however, includes employees who relocated to BLM field offices scattered throughout the West as part of a broader reorganization.

The number of employees who relocated to Grand Junction, BLM officials confirmed this week, is three…

“It is a joke,” [former BLM director Bob] Abbey said. “It would be humorous if there weren’t a lot of people whose livelihoods are dependent upon the Bureau of Land Management doing their job. And when that job’s not being performed, at any level of the organization, then it’s a disservice to the public that BLM employees are supposed to be serving.”

Today, the nominee to serve as the first permanent head of the BLM in over four years, Tracy Stone-Manning, is getting her first confirmation hearing in the U.S. Senate. Stone-Manning, like her boss Interior Secretary Deb Haaland, have both criticized the relocation of BLM headquarters to Grand Junction. And as Woodruff reports, the results of the move speak for themselves. Rather than “moving the agency closer to communities they serve,” forcing this unwanted relocation on the Bureau has resulted in the experts being effectively disconnected from political decision making in Washington–which was perfect for the destructive purposes of the Trump administration, but a disaster for the Bureau’s mission to protect public lands.

Up against this emerging consensus, we have local Democrats who are still pushing for the BLM to come to Grand Junction while acknowledging, as Gov. Jared Polis does, that the Trump administration’s policies affecting public lands were “misguided.”

“While the Trump administration’s lack of knowledge of the West framed this initiative for him as one of energy dominance, the opportunity for [President Biden] is to see this initiative as an opportunity for locally driven conservation,” Polis wrote. “Where he seemed to think it would favor extractive industries, I know that Coloradans across our state realize the need to conserve the places we love.”

Which means our local boosters might lose this one. In the larger scheme of things, they might need to.