Who has a seat in Congress and uses it to ask stupid questions? This guy!

As The Washington Post reports, the Manhattan District Attorney has some bad news for former President Donald Trump:

Manhattan’s district attorney has convened the grand jury that is expected to decide whether to indict former president Donald Trump, other executives at his company or the business itself, should prosecutors present the panel with criminal charges, according to two people familiar with the development…

…The move indicates that District Attorney Cyrus R. Vance Jr.’s investigation of the former president and his business has reached an advanced stage after more than two years. It suggests, too, that Vance thinks he has found evidence of a crime — if not by Trump, by someone potentially close to him or by his company.

Vance’s investigation is expansive, according to people familiar with the probe and public disclosures made during related litigation. His investigators are scrutinizing Trump’s business practices before he was president, including whether the value of specific properties in the Trump Organization’s real estate portfolio were manipulated in a way that defrauded banks and insurance companies, and if any tax benefits were obtained illegally through unscrupulous asset valuation.

The district attorney also is examining the compensation provided to top Trump Organization executives, people familiar with the matter have said.

The news of a grand jury looking into Trump and his organization reminds us of one of the more notable blunders in recent Colorado political history. In July 2019, former special counsel Robert Mueller was testifying before Congress on matters related to his investigation of the 2016 Trump campaign when Rep. Ken Buck (R-Greeley) butted in to ask a few questions. Buck, a former District Attorney in Weld County, broke the cardinal rule of never asking a question about which you don’t already know the answer:

Rep. Ken Buck: “Could you charge the president with a crime after he left office?”

Buck: “You could charge the President of the United States with obstruction of justice after he left office?” 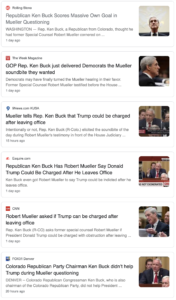 Late July 2019 was not a good news cycle for Rep. Ken Buck (R-Greeley)

As Paul Waldman of The Washington Post noted at the time:

That is what soccer fans call an “own goal.” What Buck inadvertently argued, with Mueller’s help, was that while the evidence of Trump’s personal cooperation with Russia was insufficient to sustain a conspiracy charge, the evidence may well have been sufficient to sustain an obstruction charge, and it may have only been Trump’s current position that is saving him from an indictment.

Buck later tried to defend himself by attempting a ridiculous narrative that Mueller had somehow “misunderstood” his questions, as though Buck’s queries were too complicated for someone like Mueller to comprehend.

Perhaps in an effort to atone for his idiocy during the Mueller testimony, Buck would become a harsh critic of efforts to impeach Trump. Buck said that only “very soft people” were worried about Trump’s alleged crimes, and then turned into a devotee of “The Sideshow Bob Defense,” which essentially held that it was illogical to punish Trump for only attempting to extort a foreign government for personal political gain. When the (first) Trump impeachment hearings got underway in late 2019, Buck pivoted to a bizarre “everybody does impeachable things” defense of Trump.

We’d love to tell you that Buck has since reformed his ways and given in to the siren call of logic, but that is not the case. Ah, well…we’ll always have the Mueller testimony.