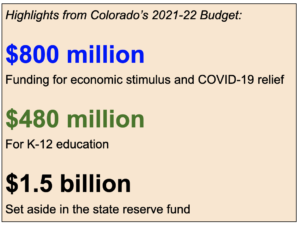 As Jesse Paul reports for The Colorado Sun:

…“This is the culmination of a year-long process — and it’s always hard. But this is the hardest it’s ever been because of the changing numbers,” Polis said just before signing Senate Bill 205 at the Capitol.

The budget takes effect in July, when the next fiscal year begins. It sets aside more than $1.5 billion for Colorado’s reserve fund that can be tapped by future legislatures. It also includes 3% raises for state employees, $480 million to reduce Colorado’s annual K-12 school funding shortfall and a $20 million line item to create hundreds of new around-the-clock care slots for people with developmental disabilities.

Also in the budget is $800 million for a state coronavirus stimulus package, the largest slice of which is being dedicated to infrastructure projects. Bills that are part of the package are still being debated in the legislature.

The state budget bill does not include $3.8 billion in federal coronavirus relief money — courtesy of President Biden’s American Recovery Plan — that will be distributed separately by the state legislature.

The “long bill” was approved by the State Senate on a vote of 28-6, with “NO” votes from Republican Sens. John Cooke; Bob Gardner; Dennis Hisey; Paul Lundeen; Jerry Sonnenberg; and Rob Woodward. As was also the case in 2020, not a single House Republican voted in support of the 2021-22 budget (which lawmakers are constitutionally-bound to approve each legislative session).

It might get lost among other big issues, including legislation to reduce the cost of health care by 18% and a much-needed proposal to fund transportation infrastructure projects in Colorado, but approving a state budget that restores funding to many essential services is an accomplishment that deserves its own standing ovation.

As we’ve said before: Elections matter.