Get More Smarter on Cinco de Mayo (May 5) 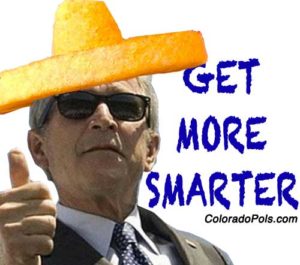 Happy Cinco de Mayo! Please celebrate responsibly and remember why this is a holiday. Let’s Get More Smarter; if you think we missed something important, please include the link in the comments below (here’s a good example). If you are more of an audio learner, check out The Get More Smarter Podcast. And don’t forget to find us on Facebook and Twitter.

► President Biden will address the nation today on the status of the $1.9 trillion American Recovery Plan approved by Congress earlier this year. As The Washington Post reports:

President Biden plans to address the nation Wednesday on the implementation of the $1.9 trillion coronavirus relief package passed by Congress in March that included $1,400-per-person stimulus payments, aid to state and local governments, and other measures. Earlier in the day, he visited a Mexican restaurant that is benefiting from a relief program that was part of the package.

► Facebook decided to uphold a decision to ban Donald Trump from the social media network.

► As POLITICO reports, it appears inevitable that House Republicans will boot Rep. Liz Cheney from her leadership position because she refused to play along with “The Big Lie” that Donald Trump actually won the 2020 Presidential election.

► Westword looks at which Colorado counties are doing the best (and worst) job of vaccinating local residents.

► Colorado Newsline reports on the rollout of a big transportation funding proposal — with an impressive list of supporters — at the state legislature:

A broad coalition of state and local elected officials and Colorado business groups on Tuesday unveiled a new legislative proposal that they hope will bring an end to a years-long quest to secure billions in new funding for roads and other transportation infrastructure.

“For the first time, we are introducing something that isn’t just a band-aid, but is instead a real framework to future-proof our transportation system,” Senate Majority Leader Steve Fenberg, a Democrat from Boulder, said in a press conference at the State Capitol. “This is a big deal.”

The bill unveiled Tuesday would allocate nearly $5.3 billion in funding for transportation over the next decade, $3.8 billion of which would come from a variety of new revenue mechanisms including fees on gasoline sales, ridesharing apps, deliveries, vehicle registrations and more. Another $1.5 billion would come from the state’s general fund and federal stimulus spending.

Supporters say the bill will help Colorado begin to address a backlog of badly-needed infrastructure improvements and could help the average Colorado driver save hundreds of dollars per year in costs associated with road congestion and vehicle maintenance needs caused by inferior roads. It would also allocate more than $700 million to vehicle electrification to support the state’s goal of putting nearly 1 million electric cars on the road by 2030.

Jesse Paul of The Colorado Sun has more on the announcement, as does Colorado Public Radio, 9News, and Denver7.

Let’s dig into more news from the state legislature…

House leaders are pushing for a $75 million broadband expansion project.

Colorado law enforcement may be required to take additional training in the wake of a scandal surrounding the arrest of a woman with dementia in Loveland.

Lawmakers are considering legislation that would bar insurance companies from using consumer information to set rates that might vary based on race or sexual preference.

► As Colorado Newsline reports, Republicans are totally against a new proposal from President Biden that they haven’t even seen yet:

Republicans on the U.S. House Natural Resources Committee on Tuesday previewed their objections to the Biden administration’s still-unreleased plan to conserve 30% of U.S. land and water by 2030.

President Joe Biden created what is commonly called the “30 by 30 plan” in a Jan. 27 executive order, but the administration hasn’t released details about how it will define protection or how the government would reach the goal. Committee Republicans complained Tuesday that those details were still lacking, but laid out the arguments they’ll likely use regardless of the details in the final plan…

…The lack of details known about “the radical 30 by 30 land grab initiative,” as U.S. Rep. Lauren Boebert (R-Colo.) dubbed it, did not stop members from confidently projecting what it would entail.

Boebert, who appeared to join the virtual forum from the inside of a vehicle, [Pols emphasis] and U.S. Rep. Pete Stauber (R-Minn.) were certain it would include violations of private property rights and government overreach.

► As The Associated Press reports, House Republican leaders are STILL complaining about the decision by Major League Baseball to move the 2021 All-Star Game to Denver. Democrats have a simple response:

“Republicans, and no one else, own all the repercussions,” said Georgia state Democratic Party spokesperson Rebecca Galanti.

► A lawsuit that could fundamentally change TABOR will get a big hearing in the 10th Circuit Court of Appeals on Monday.

► As Erik Maulbetsch reports for The Colorado Times Recorder, Colorado Republicans are outsourcing their candidate training efforts to private groups.

► The University of Colorado at Boulder will hold a virtual commencement ceremony on Thursday.

► The Denver Post reports on the ongoing battle over permit renewals for the Suncor refinery in Commerce City:

More than 150 people participated in these online hearings Tuesday night and last Saturday morning. A coalition of neighborhood groups, and activists who support a faster shift to clean energy, are targeting Suncor’s 89-year-old refinery — located just north of Denver in Commerce City near the confluence of the South Platte River and Sand Creek — as a toxic relic of the fossil fuel era…

…Suncor’s refinery regularly has polluted at levels above the limits set in its outdated permits.

Between March 27 and April 22, the refinery broke limits 15 times, according to state data reviewed by The Denver Post. The emissions included hydrogen sulfide (at levels nearly double a 162 parts per million limit for flaring waste), carbon monoxide and sulfur dioxide (up to 229 pounds an hour above a limit of 15.68 pounds), the data shows.

► The RTD Board is conducting a study to try to determine what in the hell they are doing with their complicated rate structure.

► Westminster Mayor Herb Atchison abruptly resigned in the midst of a recall effort.

► Earmarks are back in Congress, and Colorado Republicans are refusing to play with them. This only hurts the people in Congressional Districts 3, 4, and 5.

.@facebook thank you for securing the GOP majority come 2022.

► Wait, what? This is still a thing IN COLORADO?

► The Aurora Police Department is the best at being the worst.

► Colorado Republican State Rep. Ron Hanks was ahead of his time, apparently:

TN State Rep. Justin Lafferty (R) claims the three-fifths compromise — counting Black people as less than a person — was included in the Constitution “for the purpose of ending slavery.” pic.twitter.com/A6OpfRIwMd

► No, Antifa is not going to kill your Grandma.

► Check out the latest episode of The Get More Smarter Podcast, including an interview with Grand Junction Daily Sentinel politics reporter Charles Ashby. Click here for a separate look at what it’s like to get Ghosted by Lauren Boebert’s office.