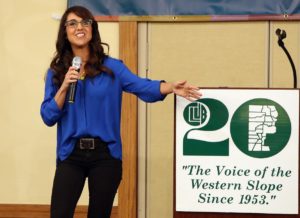 As a political reporter for The Grand Junction Daily Sentinel, Charles Ashby has covered politics and politicians in Colorado for decades. This includes the offices of former Congressional Members Scott McInnis, John Salazar, and Scott Tipton, as well as current Congressperson Lauren Boebert (R-ifle).

You might think that Boebert would have some sort of a working relationship with a well-respected political reporter who writes for one of the largest newspapers in her district (and perhaps the largest newspaper in her hometown of Rifle). But as Ashby told hosts Jason Bane and Ian Silverii on The Get More Smarter Podcast last week, Boebert’s office literally doesn’t even respond to his inquiries.

You can listen to the entire interview after the jump. In the meantime, we transcribed Ashby’s comments about his experience in trying to cover the Congressperson that represents readers of The Grand Junction Daily Sentinel:

ASHBY: Well, it’s very difficult when you have a sitting Congressman who won’t return your calls, whose press office won’t even return an email or a text message. They’ll send you out their press releases, and if you want a response, you have to check her Twitter account. So that’s very frustrating. Even Tipton — his people didn’t like me much, either — but they would at least talk to me. They would at least answer questions. And she doesn’t do that. So, that’s very frustrating. [Pols emphasis]

SILVERII: She doesn’t seem to have a problem getting airtime on Newsmax or Fox News or Breitbart, but it does seem like she is allergic to the Colorado press corps. Do you think that’s an intentional strategy on her part?

ASHBY: Oh, God, yes. Oh, definitely. She wants to talk to people who she sees as favorable to her. [Pols emphasis] And I’ll give you a good example. Most of her public events that she has been doing, all the way back from campaigning, have been to friendly crowds. Earlier this month she was at the spring conference for Club 20, which is a government/civic/private group of all the Western Slope counties. [She was there] just to answer questions, and that has Democrats and Republicans and Unaffiliated [voters] on that panel, and she was asked a couple of questions that came from Democrats that she didn’t like. She got very, very, very upset afterward. [Pols emphasis]

Yes, but… [laughter from Bane and Silverii].

SILVERII: But HOW did he get there?

ASHBY: Yeah, but she didn’t answer that question. She got really upset. I can’t remember who it was — it was a woman on the Aspen City Council, I think, who asked that question. Somebody else, and I wrote the story about this, from San Juan County — a Democrat — a Commissioner down there, asked her, ‘Are you willing to compromise with people on the other side so that we can get things done?’ And she wasn’t meaning it in the sense of, ‘I’m going to compromise my principles, I’m going to compromise my values.’ No, she meant, when you’re dealing with legislation…this country was built on compromise, right? That’s why it works the way it works. And she, of course, said emphatically, ‘No, I will not.’

And then the very next week, she and Marjorie Taylor Greene are the only two lawmakers to vote against a bill to put money into a bone marrow transplant website that matches people up [with others] who need bone marrow. They’ve [Congress] been funding that since the 1980s. It was widely bipartisan. There were only two votes against it — those two. And she says she did that because she doesn’t want to spend more government money. And then she introduces a bill to increase the PILT payments to counties and local governments. So…okay.

Click after the jump to listen to more of Ashby’s interview on The Get More Smarter Podcast.