As readers know, Rep. Lauren Boebert fires off enough objectionable statements in the average day that if we wanted to, we could spend all our time every day doing nothing but writing blog posts where we perform the prosaic equivalent of picking our jaws up off the floor. Rather than get caught up in this Donald Trump-inspired vicious cycle in which bad behavior is rewarded with constant attention, we ignore a lot of stuff from Boebert that would under most other circumstances warrant outrage. 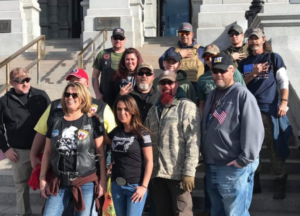 Lauren Boebert with a group of white people.

The story of this particular Tweet from last weekend is worth making an exception to the rule. This is Rep. Boebert asserting that “denying vaccine access to White people doesn’t make you woke, it makes you racist.” Boebert doesn’t supply any context for this statement to her 600,000 Twitter followers, which as Raw Story reports led to some confusion:

Rep. Lauren Boebert (R-CO) kicked off her morning by claiming that “White people” are being denied access to the COVID-19 vaccine that had critics of the controversial lawmaker scratching their heads wondering what she was tweeting about…

With reports coming in that vaccine providers are not seeing as many people coming in for their shots as was hoped as it becomes readily available, commenters on Twitter accused Boebert of trying to create a racial controversy where none exists.

As it turns out, and you could have predicted, there is a story circulating on right-wing media that Boebert appears to be basing this on, including in the Phil Anschutz-owned Washington Examiner, about a clinic in Seattle Washington called the African American Reach and Teach Health Ministry (AARTH):

The African American Reach and Teach Health Ministry is a vaccine provider that allows users to sign up for the shot through a digital scheduler. People who use the site for appointments at the Fred Hutch Cancer Research Center on May 1 are prompted to answer whether they are a person of color or white.

Minority users can sign up for an appointment if there’s an available slot. White users are placed on a standby list, and AARTH says it will contact them if a spot becomes available.

What this is, of course, is a nonprofit specifically devoted to serving the African-American community–whose vaccination rates for COVID-19 are dramatically lower than the white population. They are operating under the (correct) assumption that white people with privilege and mobility and time for “vaccine hunting” can get vaccinated everywhere, but disadvantaged communities need outreach campaigns targeted directly at them.

In short, this is a completely fake controversy engineered to foment baseless race resentment. In Washington state just like here in Colorado, the question increasingly is not the availability of vaccines but hesitancy to take them. White political conservatives are some of the most reluctant despite no physical barriers to access. And we’ll say it: white people trying to get a vaccine appointment from the African American Reach and Teach Health Ministry have enough alternative options that they are almost certainly trolling for publicity.

In Rep. Boebert’s case, it’s even worse since she has said she has no need to personally get vaccinated–meaning her interest is just about carrying the torch for the supposedly downtrodden white race. Along with Boebert unapologetically pushing “white replacement” conspiracy theories regarding immigration policy, it’s another disturbing indicator of what’s really going on inside her head.