Get More Smarter on Wednesday (April 21)

Today is 4-21-21, which is probably an astrological sign of the apocalypse, or something. Let’s Get More Smarter; if you think we missed something important, please include the link in the comments below (here’s a good example). If you are more of an audio learner, check out The Get More Smarter Podcast. And don’t forget to find us on Facebook and Twitter. 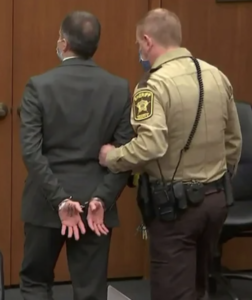 Derek Chauvin is led out of Minneapolis courtroom in handcuffs after Tuesday’s verdict.

► Former Minneapolis police officer Derek Chauvin was convicted on all three counts related to his role in the killing of George Floyd in May 2020. The Denver Post has the reaction from Colorado leaders on Tuesday afternoon:

Authorities at midday cleared the parking lot that rings the Colorado Capitol and increased police presence around the building, but almost no one was outside the Capitol hours after the verdict was announced. Inside, members of Colorado’s Black Democratic Legislative Caucus held a news conference expressing their gratitude in the news.

“We felt the weight of our ancestors, we felt the collective sigh of relief,” said caucus chair Rep. Leslie Herod, a Denver Democrat. “And we felt a moment of solidarity in the work.”

Colorado’s Congressional Democrats are calling for more work on police reform in the aftermath of the Chauvin verdict.

► Coloradans can now get a COVID-19 vaccine at one of three locations without a prior appointment:

Remember, friends: Employers are REQUIRED to provide paid leave for employees who need time off work to get vaccinated. Despite the incentives for receiving the vaccine, which include NOT DYING FROM COVID-19, the state estimates that 10% of the population will still refuse to get vaccinated.

► Colorado Public Radio looks at a climate change battle in the state legislature:

“What we’re doing is relying on a lot of good will, a lot of press releases, that are not legally enforceable,” Winter said.

Winter said the latest legislation, SB21-200, is necessary to hold Colorado to its climate action goals — a greenhouse gas reduction plan Polis signed in 2019. Those targets commit the state to reduce its contribution to climate change 26 percent by 2025, 50 percent by 2030 and 90 percent by 2050. Each target is measured against Colorado’s 2005 emission levels.

Governor Jared Polis is not on board with SB21-200, preferring instead to promote less-specific measurements of success in reducing emissions.

Legislation is on its way to the desk of Gov. Polis that would require Colorado businesses to allow customers to pay with cash.

Senate Majority Leader Steve Fenberg says new gun safety legislation could be introduced in the legislature as soon as this week.

The Colorado Sun reports on proposed legislation that would allow school districts and other government agencies to continue to name just one “sole finalist” for top jobs.

CBS4 Denver has more on legislation to increase access to mental health services for teenagers.

The Denver Post has more on the discussion surrounding efforts to restrict the potency of legal marijuana.

The Colorado Springs Independent summarizes some new and pending legislation.

► Congressman Jason Crow (D-Aurora) is re-introducing legislation to push back against price hikes from pharmaceutical companies. From a press release:

“It’s wrong that Coloradans can’t afford to buy basic life-saving meds while big companies continue to make record profits. More than one in 10 Coloradans reported skipping doses of needed prescriptions because they could not afford it,” said Congressman Crow. “…

…The Freedom from Price Gouging Act stands up to Big Pharma, protecting patients from unnecessary price hikes and saving taxpayer money. My colleagues and I are reintroducing this common sense legislation to stop skyrocketing prescription drug costs and help Coloradans get the medications they need.”The Freedom From Price Gouging Act requires drug manufacturers to pay the government back when they increase drug prices covered under the Medicare Part B program. Part B provides insurance coverage for drugs that are often administered in outpatient settings, including chemotherapy drugs. For example, over 2017 and 2018, the price of Rituxan, a drug used to treat non-Hodgkin lymphoma, rose 17 percent—more than twice the rate of medical inflation—costing taxpayers more than $1.75 billion in 2017. The legislation passed the House of Representatives last year as part of H.R. 3, the Elijah E. Cummings Lower Drug Costs Now Act.

As The Washington Post reports, Congressional Republicans are gearing up to fight back AGAINST efforts to lower prescription drug prices.

► As POLITICO reports, House Democratic leaders are working on a plan to allow the House of Representatives to effectively function in the wake of more pointless stalling tactics from the Freedom Caucus:

House Democratic leaders believe they’ve found a workaround to defuse weeks of delay tactics used by hard-line Republicans that have irked lawmakers in both parties and brought much of the chamber’s floor action to a halt. At least temporarily.

The conservative firebrands have sought to make life difficult for Democrats in protest against what they say are efforts to shut out the minority party. But their tactics have made it virtually impossible for Democrats and Republicans to fast-track so-called suspension bills — noncontroversial measures that are critical to running the House — and instead created a legislative slog.

Under the response shaped by House Majority Leader Steny Hoyer, leaders of the far-right Freedom Caucus would no longer be able to effectively seize control of the floor by demanding individual votes on dozens of suspension bills and forcing members to vote late into the night, at least for the rest of this week.

Instead, Hoyer plans to package much of that broadly palatable suspension legislation into a single block on the floor, which he said would “save us somewhere in the neighborhood of seven-and-a-half hours” of voting time.

Performative obstruction. This is the hallmark of the current Republican Party. 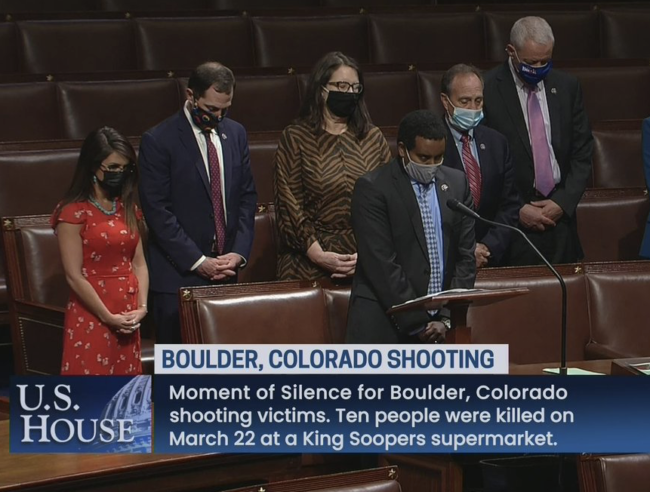 ► As Colorado Newsline reports, Interior Secretary Deb Haaland is pushing for federal funding to combat climate change and assist Native American communities. In her first congressional hearing as the head of the department, Haaland was also notably evasive on the question of whether or not the headquarters of the Bureau of Land Management might remain in Grand Junction.

► The House of Representatives passed Rep. Ed Perlmutter’s marijuana banking bill once again. All four Democrats in Colorado’s congressional delegation supported the measure, while Republican Reps. Ken Buck and Doug Lamborn voted no (Rep. Lauren Boebert did not cast a vote). Perlmutter has introduced the SAFE Banking Act in every Congressional session since 2013, but the issue has never received even a committee hearing in the U.S. Senate.

► As The Colorado Sun reports, southern Colorado towns that host legal marijuana businesses are worried about the impact of legalization in neighboring New Mexico.

► Proposed ballot measures seeking to reduce tax revenue in Colorado are working their way through the title board process.

► Suncor, the Commerce City refinery notorious for its air and water pollution, needs to get its permits renewed next month.

► The Douglas County School Board selected Corey Wise as its new school superintendent.

► An EPA watchdog report finds that experts were shut out of a process to create new vehicle emissions standards during the Trump administration.

► Congressperson Lauren “Q*Bert” Boebert (R-ifle) hasn’t had much to say about the Derek Chauvin verdict, but she’s laser-focused on the REAL problem:

► Former rock star and current right-wing lunatic Ted Nugent is very ill as he battles COVID-19. As recently as Christmas Day 2020, Nugent was publicly saying that the COVID-19 pandemic was a hoax.

Pro-Trump attorney Lin Wood told Newsweek that he “sometimes works up to 20 hours a day as part of his efforts to overturn the results of the 2020 presidential election.”

As they say, everybody needs a hobby.

.@RepMTG and I have introduced a bill to #FireFauci.

We would pay the fines to give our speeches without useless masks, but Pelosi would cut off the microphone. pic.twitter.com/GkPNdGlAcM

► Colorado is not getting 100 million new jobs from the relocation of the 2021 baseball All-Star Game.