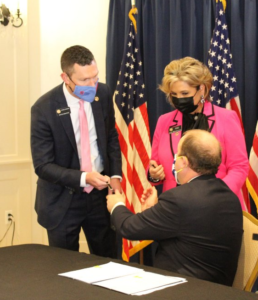 The legislation was introduced before the deadly attack on a Boulder King Soopers in March, though the shootings brought greater urgency to the measures, which are mainly focused on reducing gun-related suicides.

“There’s no single gun safety policy that can put an end to the epidemic of gun violence in America, but by taking commonsense steps like the two laws signed today, we can start to make a dent and save some lives,” said Rep. Tom Sullivan, D-Centennial. “Reporting a missing firearm is a simple measure that will stop firearms from ending up in the wrong hands and give law enforcement more tools to find these weapons before they end up in crime scenes.”

“Coloradans are tired of seeing gun violence rip families apart and take precious lives away from us far too soon,” said Rep. Leslie Herod, D-Denver. “Our bill to require that missing firearms be reported to police is a simple and commonsense request that will hopefully prevent senseless tragedies like the one that took Isabella Joy Thallas’ life. I’m immensely proud that we were able to honor her memory by naming this law after her today.”

“Asking all gun owners in Colorado to safely store their firearms the way the majority of responsible gun owners already do is a small measure that can save countless lives,”said Representative Kyle Mullica, D-Northglenn. “A simple and affordable lock on a firearm could prevent the type of tragedies and injuries that befall Colorado families every day.”

Grateful to @GovofCO for his leadership on gun violence prevention in Colorado. Safe Storage and Lost and Stolen Gun legislation being signed into law today. Let’s keep the momentum going! #endgunviolence #coleg #coceasefire

We wrote earlier this month about the passage of Senate Bill 21-078, the “Isabella Joy Thallas Act” named after a victim of gun violence in Denver killed with an assault weapon stolen from a Denver police officer. Back in March we covered the ten-hour marathon debate in the Colorado House over House Bill 21-1106, which requires gun owners in households with either children or prohibited persons use either a gun lock or store them in a gun safe.

In both cases, these bills passed the Colorado General Assembly without a single Republican vote. That’s the norm of course for gun laws in modern American politics, but it’s worth noting in this case since these are some of the easiest to justify proposals to reduce the harm from gun violence out there today–in theory much less controversial than the 2019 “red flag” law, not to mention the 2013 gun safety bills that resulted in political backlash for Democrats.

With the public overwhelmingly in favor of gun control going well beyond safe storage and reporting of lost and stolen guns, this was a missed opportunity for Republicans to show reason that might have afforded them cover in more contentious battles down the road. For Gov. Polis and majority Colorado Democrats, it’s yet another win on an issue for which wins, at least at the federal level, are in dishearteningly short supply.

If you want more wins like this, it starts with giving our leaders in Colorado the credit they deserve.