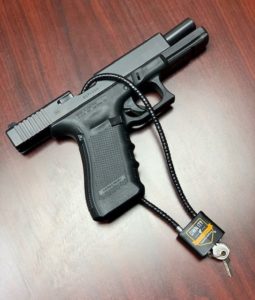 As Colorado Newsline’s Faith Miller reports, debate on the floor of the Colorado House of Representatives went on and on for hours last night over what most people would consider to be a no-brainer bill, House Bill 21-1106, which requires gun owners in households with either children or people prohibited from possessing guns to take reasonable steps to secure them:

Under HB-1106, a person could be prosecuted for unlawful firearm storage if a young adult could gain access to a firearm without their parent or guardian’s permission; or if someone barred from having a gun lives on the premises where a firearm is not properly stored. To comply with the bill, a firearm would have to be kept on the lawful owner’s person or stored in a way that “a reasonable person would believe to be secure.”

Licensed gun dealers would be required to provide a locking device with each firearm purchase, or they could be subject to a $500 fine. The locking device would need to prohibit someone from using a gun unless they could open the lock with a key, combination or fingerprint verification.

“Federal law already requires firearm dealers to provide a secure storage device with the sale of every handgun,” Duran said on the House floor. “However, the law does not require that gun owners actually use the device or any other best practices to secure their firearms.”

But as AP’s Patty Niebert reported via the Colorado Sun, House Republicans led by disgraced ex-House Minority Leader Patrick Neville found this modest safety measure to be an affront to his right to keep a loaded pistol under his pillow, on his kitchen counter, or wherever else he damn well pleases:

GOP Rep. Patrick Neville brought his own locking device to show how long it takes to unlock and load a gun. He joined other Republicans in calling the bill “denied defense” — citing instances of home intruders and domestic violence where quick access to a firearm could be life-saving for self-defense.

“I’m afraid that this bill will cost lives. If you know about weapons and you know about hazard situations — you know you need quick access, easy access,” said Republican Rep. Shane Sandridge, a former police officer.

The illogic of suggesting that a bill requiring safe storage of a gun in a household with children and/or felons running around would “cost lives” is pretty outrageous when you think it through. The few additional moments necessary to unlock a weapon in a defensive situation are a small price to pay to prevent children from shooting themselves deliberately or accidentally with a gun left in easy reach. And if your household doesn’t include children or persons prohibited from having a gun, you would still be free to stash loaded weapons all around your house for instant access like a character in a Quentin Tarantino movie.

Like we learned in Kill Bill, it’s probably just best to keep kids away from your double life as an international assassin. Actually there are a few such movies. Fortunately most of us do not have this problem, but the problem of kids and felons getting their hands on improperly stored guns is substantially more reality-based.

Closer to reality, yesterday’s ten-hour marathon debate featured the usual complaints from Republicans about the rural/urban divide, the “real tragedy” of kids not learning to be safe around guns, and how the state’s county sheriffs might decide not to enforce a safe storage law if they don’t like it. None of these objections even came close to challenging the basic premise of the bill, which is that guns should not be left easily available to misuse by children and prohibited people. Politically, it might have been a good idea to introduce this bill right after a Republican lawmaker left a loaded gun in committee hearing room several years ago at the Colorado Capitol.

But with polls showing that some 78% of Americans support requiring locks on all guns–not just in the at-risk households specified under House Bill 21-1106–Democrats can feel confident about brushing aside Republican stalling tactics and passing the bill. Outside a very small and not very reasonable segment of the population, this just isn’t the controversy it’s played up to be.