Get More Smarter on Wednesday (March 24)

With any luck, you will not be traded to Cleveland today. Let’s Get More Smarter; if you think we missed something important, please include the link in the comments below (here’s a good example). If you are more of an audio learner, check out The Get More Smarter Podcast. And don’t forget to find us on Facebook and Twitter.

► President Biden called on Congress to re-enact an Assault Weapons Ban after mass shootings in Georgia and Boulder, Colorado. But as The Associated Press reports, Republicans are already digging in:

Senate Majority Leader Chuck Schumer vowed Tuesday morning to bring to the Senate floor legislation passed by the House that would require background checks for most gun sales and transfers. He said the Senate “must confront a devastating truth” after a lack of congressional action on the issue for almost three decades.

“This Senate will be different,” said Schumer, D-N.Y., a day after a shooting at a crowded Boulder, Colorado, supermarket, killed 10 people, including a police officer. “The Senate is going to debate and address the epidemic of gun violence in this country.”…

…Many in the GOP base are still strongly opposed to gun control of any kind. In Tuesday’s hearing, which was scheduled before the Colorado shooting, Republicans showed no signs of wavering. Texas Sen. Ted Cruz said that every time there is a shooting, the Senate engages in “ridiculous theater,” with Democrats proposing laws that he said could take guns away from law-abiding citizens. Republicans have argued that background checks would not stop most mass shootings and would prevent some lawful gun owners from purchasing firearms.

That might not be the argument you think it is, Sen. Cruz. It’s also worth noting that some right-wing media outlets are voicing agreement on banning “weapons of war.”

Elsewhere, Rep. Joe Neguse (D-Boulder) has been making appearances on a lot of national television shows, including CBS This Morning. “It does not have to be this way,” said Neguse.

Governor Jared Polis has ordered flags in Colorado to be flown at half-staff for 10 days to honor the victims of the Boulder shooting.

► While it may seem that 2020 had fewer gun deaths owing to the COVID-19 pandemic, as The Washington Post reports, 2020 was actually a record year for gun violence. Westword looks at how the National Rifle Association (NRA) helped pave the way for mass shootings.

► State lawmakers are discussing potential gun safety measures in response to Monday’s shooting in Boulder. As Alex Burness reports for The Denver Post:

The state senator who represents the district where the tragedy occurred said he’s drafting a bill to restore cities’ ability to enact gun restrictions above and beyond the state’s laws.

The shooting came just days after a district court judge in Boulder ruled that the city does not have the legal authority to enforce its 2018 citywide ban on assault-style weapons and magazines with a capacity to accept 10 or more rounds. The judge cited a 2003 state law that preempts local gun restrictions.

Senate Majority Leader Steve Fenberg, of Boulder, said that lawmakers in the Democrat-controlled Statehouse had lightly discussed repealing that 2003 law over the past week, but the talks accelerated among legislative leaders “only in the last 18 hours.”

Colorado Public Radio has more on the push from legislators to move quickly on gun safety discussions.

Lawmakers are trying to figure out if they can legally do more to increase property tax revenues for public education.

Governor Jared Polis and state lawmakers will soon embark on a “Build Back Stronger” tour.

The House Judiciary Committee advanced legislation that seeks to give victims of sexual abuse more time to consider legal action against perpetrators.

Senate President Leroy Garcia’s bill to create a veteran suicide prevention pilot program made it through a committee hearing.

► State Representative Tom Sullivan (D-Aurora) talked to CBS News about Monday’s shooting in Boulder and how it affected him as the father of someone killed in the Aurora Theater Shooting:

► As POLITICO reports, pharmaceutical lobbyists are worried that they won’t be able to stop the next effort by Congress to lower the cost of prescription drugs.

► The Aurora Sentinel has more on a lawsuit that Aurora Mayor “Homeless” Mike Coffman has filed against the city. We wrote about Coffman’s crusade in this space last week.

► The Colorado Springs Independent digs into the affordable housing crisis and how local elected officials are addressing the issue.

Veterans know where weapons of war belong, and it’s not in @laurenboebert‘s ads or her Zoom background.
Hours after the mass shooting in Boulder, there she goes again, glorifying civilian use of weapons designed for the battlefield.

If she loves weapons so much, she can enlist. pic.twitter.com/9T6NIBfxQc

► If you’re looking for more right-wing commentary from Colorado Republicans, The Colorado Times Recorder can recommend a few links.

► A Congressional panel on protecting public lands settled along party lines, as you might expect.

► As Sandra Fish reports for The Colorado Sun, Republicans are mad that they are being held accountable for violating campaign finance laws:

The first case filed by the office’s Campaign Finance Enforcement team in January 2020 accused the Colorado Stop the Wolf Coalition of failing to file as an issue committee. That resulted in a $22,000 fine the nonprofit’s leader said the group can’t afford. Nor can it afford to continue paying its lawyer, Republican former Secretary of State Scott Gessler, to appeal the case in court.

“I’m furious about it,” said Tom Bjorklund, a Grand Junction man who served as treasurer of the nonprofit. The group is asking the office to waive the fine. “We don’t have the money to pay the fine. I would like to appeal and I know the board would too, but we don’t have the funds.”

I don’t have time to go to jail, your honor!

► More than 20 Colorado counties are moving to the lowest level of coronavirus restrictions.

► The New York Times reports on Democratic efforts in the U.S. Senate to move legislation aimed at making it easier to vote:

The Senate took its first steps on Wednesday to advance one of Democrats’ top legislative priorities, convening the chamber’s opening hearing on a sweeping federal elections overhaul to expand voting rights and blunt Republican efforts to restrict access to the ballot box through a wave of new measures racing through state legislatures.

Chock-full of liberal priorities, the bill, called the For the People Act, would usher in landmark changes to make it easier to vote, to enact new campaign finance laws and to end to partisan gerrymandering of congressional districts. The legislation passed the House along party lines earlier this month. It faces solid opposition from Republicans who are working to clamp down on ballot access, and who argue that the bill is a power-grab by Democrats.

Democrats on the Senate Rules Committee hope that testimony from Eric Holder, the former attorney general; prominent voting experts; and anti-corruption advocates will help build on a rising drumbeat of support by liberals for its enactment.

Republicans are opposing this effort on account of fears that they won’t be able to win elections if more people are voting.

► Trumpian Republicans are working on building up a massive dark money political machine.

This guy and his cluelessness scars me more than the current virus! https://t.co/Rp02l1Pidq

► As Jennifer Rubin writes for The Washington Post, Senate Republicans are doing their damndest to remain in the minority in 2023:

The GOP now embraces extremism, white nationalism and fantastical thinking. As a result, it may wind up with two nominees running for “safe” seats in 2022 who could create havoc for the party as it defends at least five seats opened by retiring GOP senators (Alabama, Missouri, North Carolina, Pennsylvania and Ohio).

► At least you’re not the captain of this massive container ship blocking THE ENTIRE SUEZ CANAL. 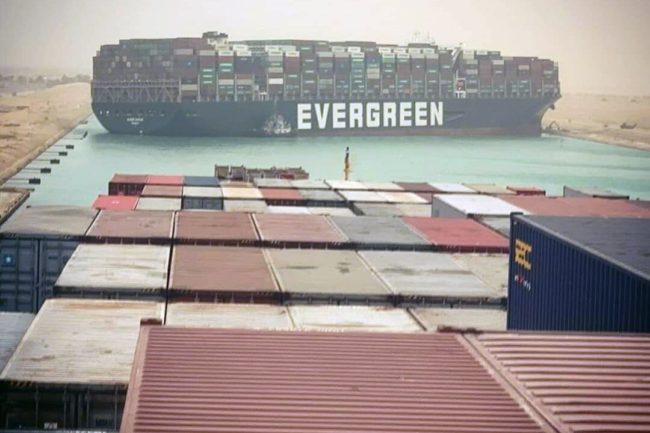 You can go forward or backward, but not side to side or back in time.

► We’re leaving this one here for another day: POLITICO examines how “owning the libs” became the core belief of the Republican Party.