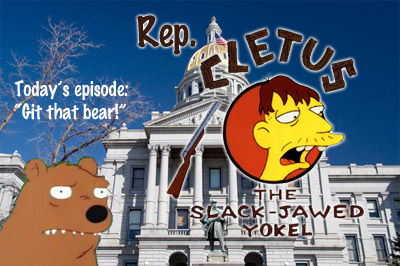 The AP reports via the Durango Herald:

A proposal set for its first hearing today would repeal a 1992 voter-approved initiative that prohibits hunting bears from March 1 to Sept. 1 and give the state Division of Wildlife authority to expand hunting dates.

Voters overwhelmingly approved the initiative amid concern that female bears were being hunted in the spring, when they are taking care of their cubs. The initiative also banned hunting bears with dogs and baiting bears with food to kill them. The bill sponsored by Rep. J. Paul Brown would not eliminate those [latter two] provisions…

But a wildlife-rights group argues the bear population still is vulnerable and its numbers could dwindle fast if more hunting is allowed.

“Sure, if you wipe out the whole population, there’s going to be no conflicts” with people, said Wendy Keefover, director of carnivore protection for WildEarth Guardians.

So the biggest problem with Rep. J. Paul Brown’s House Bill 1294 is the fact that it repeals an overwhelming vote of the people to ban hunting of Colorado bears in springtime–as a statutory change, not a constitutional amendment, the 1992 vote can be overturned by the legislature. Which is all well and good, except that Republicans use previous “votes of the people” as a shield against criticism for all kinds of things they vote down, from fee hikes to civil unions. You’d think they would hold this vote of the people in similarly high regard.

True, not when it comes to “Obamacare” and Amendment 63 either. But that’s different.

And of course, Humane Society types are very upset that hunting of bears in springtime, when they’re most vulnerable after hibernation and frequently nursing cubs, could resume. As for Rep. Brown’s safety concerns? Well, there is this episode of South Park…