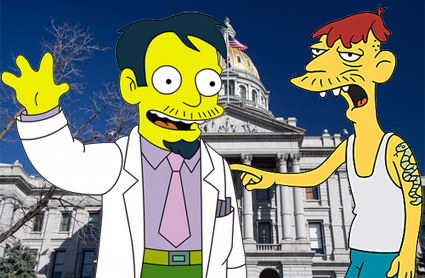 Yesterday, the GOP-controlled House Health and Environment Committee debated Senate Bill 128–a bipartisan bill that would require insurance companies in the individual market to offer child-only health insurance plans. The bill did pass the committee, but not before two rather memorable nays: from Reps. Janak Joshi and J. Paul Brown.

Here’s Rep. Joshi–remember that this is a former doctor who lost his license, as we’ve discussed in this space, a few coincidental months before he decided he wanted to be a legislator. For some, what we suspect to be a very poorly thought-out reason, Speaker Frank McNulty nevertheless saw fit to assign Dr. Rep. Joshi to the House Health Committee.

Thank you Madam Chair. We have heard here that several states, the insurance companies have pulled out of this market. That just tells me there is not enough money to be made. And also in our own state only two insurance companies have left, and they are even threatening to get out of this market. So that just tells me something about this market. And if it was a money making business, like McDonald’s or anybody [Pols emphasis], they would just come and open their shop on the corner. We don’t need to mandate them, and since this is a mandate I will be a no vote.

Well? Do you know anybody who wants their health care to be “like McDonald’s?” We noted last time Joshi embarrassed the Republican caucus on health care that he might not be the best guy to, you know, represent on the issue. Doesn’t look like he plans to prove us wrong!

And then there’s the view from…so, we really don’t want to insult our rurally located friends, who we’re happy to say Rep. Brown is not representative of (in the broader cultural sense, anyway) by making a bumpkin geographic stereotype of him. Rep. J. Paul Brown, who just happens to have grown up in a place with…a lot of barns…and corporal punishment:

Thank you Madam Chairman. What this bill does, is it tells all the insurance companies that they have to be in the market. And, they’re going to spread the risk by everybody being in the market. And it will drive up costs for others, because they will, uh, they’re going to be paying, the risk will be spread out and everybody will be paying for that risk. So, that is the way I see the bill, and, if I’m wrong, I guess, take me out behind the barn and give me a whipping. [Pols emphasis]

A cue to Republican Rep. Cindy Acree, Health and Environment Committee vice-chair and cosponsor of Senate Bill 128: we’re pretty sure he’s talking to you.

As for Democrats? How could they not hope these guys have a comment on every bill?