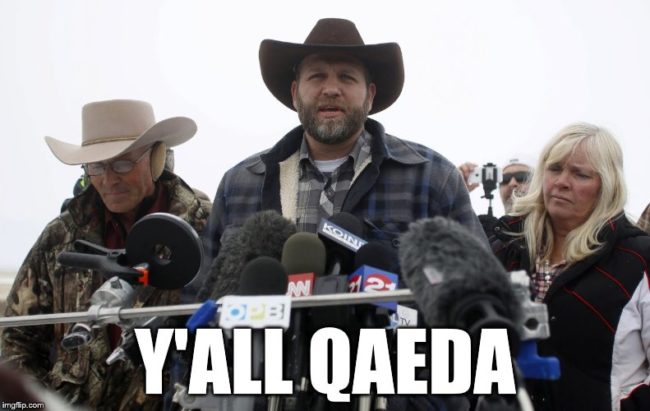 As the Daily Beast reports, far-right militia organizer Ammon Bundy, who led an armed occupation of the Malheur National Wildlife Refuge in Oregon in 2016 after his father Cliven Bundy’s standoff in 2014 with Bureau of Land Management officials in Nevada over unpaid cattle grazing fees, is on a tour to promote his new so-called “People’s Rights Network.”

In 2020, as COVID-19 was sweeping the nation, Ammon Bundy launched the People’s Rights network, a multi-state hub of activists ready to deploy against perceived government tyranny at a moment’s notice. Most of the group’s ire has been aimed at COVID-19 restrictions. The network was linked to a mask-burning on the steps of Idaho’s Capitol building last weekend, as well as the storming of an Idaho legislative session this summer and protests at the homes of Idaho health officials.

The tour comes as People’s Rights issues dark warnings about the future, and extremism-watchers warn that the group might return to its roots in public land battles. (The People’s Rights network did not return a request for comment.)

Ammon Bundy is on a mission to spread to others what a variety of militia members and self-avowed patriots did for his family’s Bunkerville, Nev., ranch: Join together, make a show of force and chase off unwanted government intrusion.

During a barnstorming tour of Utah fairgrounds, hotel conference rooms and event centers this month, Bundy has been promoting his People’s Rights network — relying heavily on the narrative of his family’s past tangles with federal land managers to argue its necessity to would-be members.

“That’s what I’m selling. I’m selling the ability for you to be able to call upon your neighbor when you need. I’m selling the ability for you to unite and to come together with your neighbor and get to know them for when times come when you will need them,” Bundy said at his first stop in Logan, Utah, last week. “Because I hate to say it — but I said it a lot — we are not going to find [a] remedy to the security of our liberties in Washington, D.C.”

“Maybe we can’t trust the (pandemic) numbers that are being portrayed, but it really does not matter because even if there were nine out of 10 people that were dying of this terrible virus, or whatever it might be, it still does not give another person the right to infringe upon an individual’s rights,” Bundy said. “The most dangerous thing about wearing a mask is you’re sending the message that someone else has control over your body.”

In a radio interview earlier that day, Bundy said that it would go against his conscience to wear a mask because he’d be participating in a lie. At the meeting, attendees cheered frequently when Bundy would talk about his personal convictions against masks and when he questioned the legitimacy of the COVID-19 pandemic.

Well folks, we’re obliged to report that Ammon Bundy’s “barnstorming tour of Utah” has metastasized across the border to Grand Junction, Colorado, where Bundy is reportedly set to give a talk at the Mesa County Fairgrounds tomorrow at 6:00pm on how to organize the very fine people of the Western Slope to band together and “resist” masks, grazing fees, and other assorted forms of Western-wear tyranny. We don’t expect an armed standoff enforcing it, but face masks are still the law in Colorado.

So score one for the resistance we guess! But it’s tough to see the rage being sustained long. In the latter stages (hopefully) of the COVID-19 pandemic, the impetus for “resistance” to public health measures will continue to fade, and the Bundy clan will have to find another axe to grind–or maybe just pay their grazing fees.

Either way, Ammon Bundy can start the revolution without us.