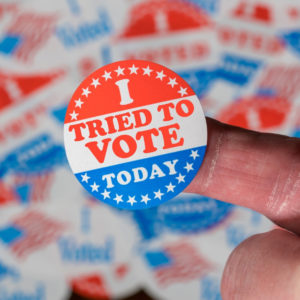 As readers know, there are a number of election-related bills making their way through state legislatures around the country in 2021 including here in Colorado. Although many of these bills are progressive reforms intended to make it easier to vote like it is (humble brag coming) here in Colorado, quite a few are very straightforward vote suppression measures intended to reduce access to early voting, mail ballots, and other conveniences that have been proven in our experience to increase turnout.

In our kitty-corner neighbor Arizona, these vote suppression bills briefly included a now-gratefully dead measure that would have allowed the state legislature to override the popular vote in presidential elections through a process that basically assumed that would be necessary. The bill died, but other legislation to cut early voting hours and impose increased identification standards for mail ballots are still in progress. And as CNN reports, Arizona state Rep. John Kavanagh is saying the quiet part out loud with regard to these vote suppression bills with what can be best described as a breathtaking frankness:

“There’s a fundamental difference between Democrats and Republicans,” Kavanagh said. “Democrats value as many people as possible voting, and they’re willing to risk fraud. Republicans are more concerned about fraud, so we don’t mind putting security measures in that won’t let everybody vote — but everybody shouldn’t be voting.” [Pols emphasis]

He pointed to Democrats’ emphasis on registering voters and pursuing those who have not returned ballots — tactics that Republicans have successfully implemented in other swing states — and said doing so means that “you can greatly influence the outcome of the election if one side pays people to actively and aggressively go out and retrieve those ballots.”

“Not everybody wants to vote, and if somebody is uninterested in voting, that probably means that they’re totally uninformed on the issues,” Kavanagh said. “Quantity is important, but we have to look at the quality of votes, as well.” [Pols emphasis]

Just over forty years ago, Heritage Foundation founder Paul Weyrich gave a speech to a convention of evangelical Christian leaders in which he declared with a similar degree of frankness to Rep. Kavanagh that “I don’t want everybody to vote…as a matter of fact, our leverage in the elections quite candidly goes up as the voting populace goes down.” This quote has been regularly dusted off and thrown back at Republicans during battles over voting rights, with the general reaction from Republicans being to deny the premise and, for that matter, even knowing who Paul Weyrich is–despite the fact that everybody knows about the Heritage Foundation.

Well folks, in Arizona Republicans aren’t even trying to hide it anymore. “Everybody shouldn’t be voting,” a statement that would have ended political careers in most of recent American history, is now the stated goal of elected Republican legislators.

It seems to us that ought to clarify this debate everywhere.