Get More Smarter on Tuesday (March 9)

Happy “World Panic Day.” Please celebrate responsibly, or totally freak out; we’re not sure how to proceed here. Let’s Get More Smarter; if you think we missed something important, please include the link in the comments below (here’s a good example). If you are more of an audio learner, check out The Get More Smarter Podcast. And don’t forget to find us on Facebook and Twitter.

► As The Washington Post reports, President Biden is planning a big push to sell Americans on his soon-to-be-approved $1.9 trillion stimulus plan:

With passage of the plan this week all but assured, Biden plans to escalate his administration’s outreach to Americans over the coming weeks to defend the measure and lay out other priorities. It starts with his first prime-time address.

Biden’s remarks on Thursday aren’t the starting gun for a new communications campaign — for weeks, aides have done scores of interviews with national, local, and specialized media in an effort to muscle the legislation to the Resolute Desk.

But they will mark a new, more intense phase, including the president’s first formal press conference, sometime this month, which White House press secretary Jen Psaki announced on Friday.

The American Rescue Plan includes $6 billion for state and local government assistance in Colorado alone. POLITICO has more on Wednesday’s expected vote in the House of Representatives.

► Jury selection is underway in the trial of former Minneapolis police officer Derek Chauvin, who faces several charges related to the murder of George Floyd last May.

► To the Colorado legislature we go…

Republican lawmakers in Colorado wasted 10 hours on Monday extending debate on a bill to require safe storage of firearms.

The Colorado Sun previews upcoming legislation that is essentially Colorado’s version of a COVID-19 stimulus bill.

Legislation to opt Colorado students out of standardized testing this year — due to COVID-related problems — has come back to life.

Denver7 reports on the advancement of legislation intended to lower the cost of prescription drugs for Coloradans.

As The Denver Post reports, Colorado’s budget may not be in as much trouble as lawmakers feared after more than a year of the COVID-19 pandemic.

Colorado Public Radio reports on concerns about long hours and low pay for staffers at the state legislature.

► As Greg Sargent writes for The Washington Post, early successes for Congressional Democrats may be prodding Republicans to act quicker around the country in introducing voter suppression programs:

It’s no accident that the GOP’s redoubled anti-democratic and anti-majoritarian efforts have come even as President Biden’s $1.9 trillion rescue package is winning the support of large popular majorities. Indeed, for Republicans, the broad popularity of Biden’s first big move is itself arguably making their plunge into anti-democratic radicalization more urgent.

As NBC News reports, this is exactly what just happened in Iowa:

► As The New York Times explains, President Biden is fulfilling a promise to expand Obamacare access:

President Biden’s $1.9 trillion coronavirus relief bill will fulfill one of his central campaign promises, to fill the holes in the Affordable Care Act and make health insurance affordable for more than a million middle-class Americans who could not afford insurance under the original law.

The bill, which will most likely go to the House for a final vote on Wednesday, includes a significant, albeit temporary, expansion of subsidies for health insurance purchased under the act. Under the changes, the signature domestic achievement of the Obama administration will reach middle-income families who have been discouraged from buying health plans on the federal marketplace because they come with high premiums and little or no help from the government.

The changes will last only for two years. But for some, they will be considerable: The Congressional Budget Office estimated that a 64-year-old earning $58,000 would see monthly payments decline from $1,075 under current law to $412 because the federal government would take up much of the cost. The rescue plan also includes rich new incentives to entice the few holdout states — including Texas, Georgia and Florida — to finally expand Medicaid to those with too much money to qualify for the federal health program for the poor, but too little to afford private coverage.

► The Democratic Congressional Campaign Committee (DCCC) will no longer enforce a ban on working with political consultants who assist other Democratic Primary challengers.

► Chris Cillizza of CNN digs into the fascinating story of how democratic socialists took over Nevada’s Democratic Party…and how this led to the mass resignation of the current party staff.

Here’s more on the weird goings-on in Nevada from The Intercept.

► According to The Colorado Sun’s “Unaffiliated” newsletter, Rep. Ken Buck (R-Greeley) plans to announce this week that he will indeed seek re-election in 2022. This isn’t a huge surprise, though we also wouldn’t have been shocked if Buck decided to retire.

► Sandra Fish of The Colorado Sun and ProPublica takes a look at how Colorado’s Congressional delegation has voted thus far: 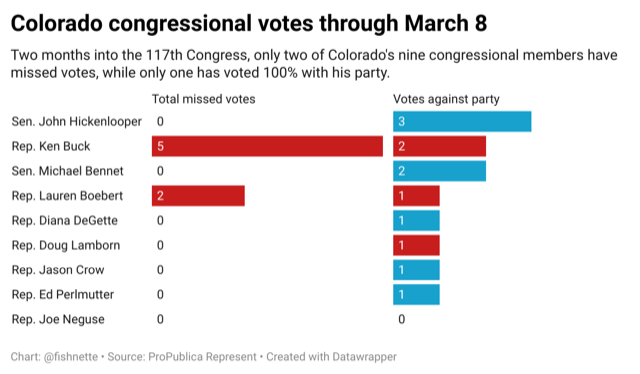 ► The Department of Interior is planning a virtual forum later this month as part of a massive review of federal oil and gas leasing programs.

► The Grand Junction Daily Sentinel updates the confirmation progress for Deb Haaland to become the next Secretary of the Interior:

Interior secretary nominee Deb Haaland is promising to work to “find a path forward” for a controversial new resource management plan for the Bureau of Land Management Uncompahgre Field Office based in Montrose.

Haaland, currently a U.S. House of Representatives member from New Mexico, addressed the issue in a written response to a question posed by U.S. Sen. John Hickenlooper, D-Colo., as part of her ongoing Senate confirmation process.

Hickenlooper sits on the Senate Energy and Natural Resources Committee, which on Thursday approved Haaland’s nomination by President Joe Biden to become Interior secretary. Her nomination still awaits a vote by the full Senate, but it appears she will receive enough votes to be confirmed, which would make her the first Native American to be Interior secretary.

► As The Colorado Times Recorder reports, a plan by Colorado Republicans to attract more Latino voters makes less sense the closer you look at it.

► The Colorado Sun tracks Colorado’s dealings with COVID-19 in a series of 13 charts.

► Douglas County Commissioners are still trying to kill you.

► Aurora is considering tougher penalties for illegal street racing after a massive gridlock late Sunday on I-225.

► Why is she in a car? And does the windshield double as a teleprompter?

Another day, another swampy bill. pic.twitter.com/pvlZrjacyf

► President Biden’s dogs have to go home to Delaware because of concerns about over-aggressive behavior in the White House.

► As The Washington Post reports, a new study shows that the Republican Party has no interest in helping its red state voters:

For decades throughout the 20th century, it notes, the industrial economy — combined with large federal expenditures, particularly in the South — drove a “great economic convergence,” in which poorer states steadily caught up with better-off ones.

But more recently, the development of the knowledge economy, whose benefits are largely concentrated in cosmopolitan hubs, has reversed this trend. Meanwhile, in many red states — mostly in the South — the model of weak unions and low wages, which made them competitive for business inside the national market, is faltering in the face of globalized production.

“Blue America is increasingly buoyed by the knowledge economy,” the analysis concludes, while “red America is struggling to find a viable growth model for the twenty-first century.”

How did this happen? A big part of the problem, the authors argue, is conservative governance.