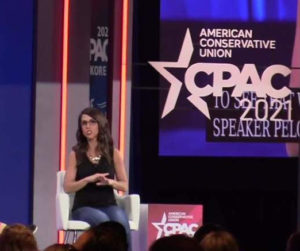 The New York Post reports from Orlando, site of the 2021 Conservative Political Action Conference (CPAC) where Republicans from lowly rank-and-file to ex-President Donald Trump have converged to lick their wounds and plot revenge after last year’s electoral defeats–and freshman Rep. Lauren “Q*Bert” Boebert is shining brightly as a fresh luminary in the freak kingdom:

Freshman firebrand Congresswoman Lauren Boebert drew cheers at CPAC Saturday after saying she was no fan of the continued security around Washington, D.C. — and “Fort Pelosi.”

“I wouldn’t be surprised if we start quartering soldiers in the committee hearing rooms,” Boebert said during a gun-rights panel at the annual GOP confab.

After Rep. Boebert exhorted her hundreds of thousands of social media followers to come to Washington D.C. on January 6th, to engage in what Boebert vowed would be “some of the most important days in American history,” then challenged the metal detectors set up because some members of Congress are worried about being shot by other members, complaining about all that extra security at the Capitol is…bold! It’s not the first time we’ve wondered whether Boebert is being audaciously or just cluelessly hypocritical. But as evidence of the latter, as Newsweek reports, from here the discussion only grew less coherent:

“They are the party of ‘no,’ and we are saying ‘no’—we are saying a big ‘hell no’ to all of their noes,” Boebert added. [Pols emphasis]

On one issue, however, Boebert is crystal clear:

Looking forward to the State of the Union address today.

Self-aware or not, Lauren Boebert and the reality the rest of us mutually acknowledge have parted ways.