The Nazi in Boebert’s Parler

Far-right social media site Parler returned to the Internet this weekend and judging by a comment on Colorado Congresswoman Lauren Boebert’s page, it still has a Nazi problem.

On Feb. 15 Boebert posted,“Let’s call it like it is. The Democrat Party is the greatest threat America faces.”

Over 24 hours after I tweeted the above screenshot and tagged both Parler and Boebert, the comment remains on the Republican’s post.

UPDATE: It’s now been three days and the comment has yet to be removed.

So @parler_app relaunched today after being shut down for permitting hate. Looking at the comments on @laurenboebert's aggressively partisan posts, not much has changed. #copolitics. pic.twitter.com/OfDcwc53nR

Reached for comment via email, Boebert’s communications director Ben Stout suggested asking her campaign staff about the post, saying that the “@LaurenBoebert” Parler handle “is not the Congresswoman’s congressional account.”

The account, which at over 114,000 followers is one of the largest state-level accounts on the site, is the only one that appears in Parler’s search results for “Lauren Boebert.” The Congresswoman is currently facing a lawsuit for blocking constituents from following her personal “@LaurenBoebert” Twitter account.

Boebert’s campaign did not immediately return an email inquiry.

The bio for commenter “WaffenSS,” which features Parler’s “real person, not a bot” verification badge, begins with a row of swastikas and the white supremacist code 1488. It then identifies the user as a “Christian Gentile, National Socialist, White Nationalist and American Patriot.” 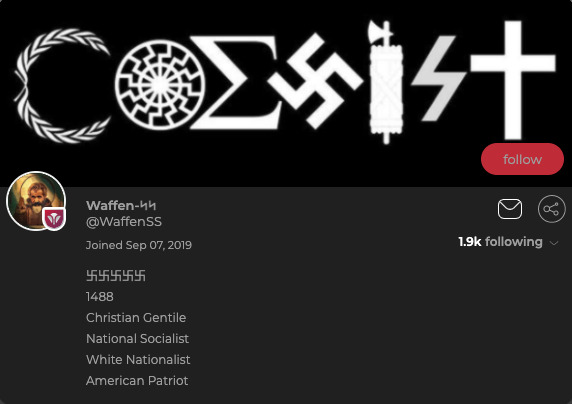 The account has nearly 2,000 followers. Parler appears to have blocked several of WaffenSS’s previous posts, replacing them with a “Trolling Content” image, yet numerous openly Nazi statements and images remain visible on the account’s timeline.

Boebert has received widespread criticism for an aggressively partisan tone on social media, in particular her “This is 1776” tweet on the morning of Jan. 6, made in support of the “Stop the Steal” rally attendees, many of whom stormed the U.S. Capitol later that day.

In a press release announcing its relaunch, the company claims it was “built to offer a social media platform that protects free speech and values privacy and civil discourse.”

Parler’s media office did not immediately return an email seeking comment. This article will be updated with any response received.